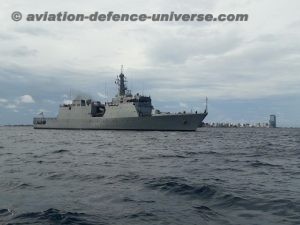 Two officers and eight sailors of the Indian Navy’s Marine Commando (MARCO) cadre are currently conducting the 2nd Asymmetric Warfare Training Exercise ‘Ekatha 2018’ at Maldives, from 28 Apr to 15 May 2018. The exercise is being held at Composite Training Centre, Maafilhafushi, which is about 145 km North of Male. During the exercise training on various diving related issues including use and maintenance of diving equipment, medical emergencies, etc, are being imparted to MNDF personnel. The Indian Ambassador to Maldives also witnessed the training exercise on 06 and 07 May 2018. IN ship Sumedha would de-induct the IN MARCOs Training Team from Male on15 May 2018.

The Joint EEZ surveillance of Maldives is an endeavour of the Government of India and the Indian Navy to ensure the safety and security of the vast EEZ of the island nation.