New Delhi. 17 October 2018. The Western Naval Command has successfully concluded the maiden trials of the Deep Submergence Rescue Vehicle (DSRV) which has ushered in a niche capability into the Indian Navy. The DSRV, which is operated by a crew of three, can rescue 14 personnel from a disabled submarine at one time. On 15 Oct 2018, the DSRV carried out under water mating with a bottomed submarine, at over 300 feet depth. On successful mating the DSRV opened its hatches and the submarine hatches and carried out transfer of personnel from the submarine to the DSRV. These sea trials have proven the newly inducted DSRV’s ability to undertake rescue operations from disabled submarines at sea and has provided the Indian Navy with a critical capability. 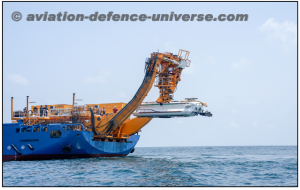 During the trials the DSRV also dived successfully up to 666 m. This is a record for deepest submergence by a ‘manned vessel’ in Indian waters. The DSRV crew has also carried out ROV operations at over 750 metres and Side Scan Sonar operations at over 650 metres, which are all ‘firsts’ for the Indian Navy. The ongoing trials will also include air transportation of the system by the IAF’s heavy-lift transport aircraft. Completion of the trials will put the Indian Navy into a small league of world navies that have integral submarine rescue capability.

The Deep Submergence Rescue Vehicle (DSRV) is designed to rescue 24 people at a time at depths of up to 600 m (1,969 ft). Their maximum operating depth is 1,500 m (4,921 ft). Power is provided by two large batteries, one fore, and one aft that power the electrical, hydraulic and life support systems. The DSRV uses mercury in a completely sealed system to allow themselves to match any angle (up to 45°) in both pitch and roll so as to “mate” (attach) to a downed submarine that may be at an angle on the sea floor. The DSRV is capable of being transported by air to anywhere in the world within 24 hours. 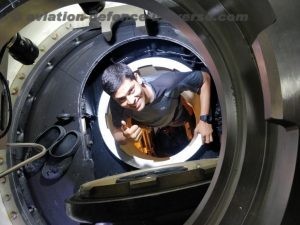 It is then loaded onto a “Mother Submarine” (MOSUB). The MOSUB then carries the DSRV to the rescue site where several trips are made to rescue all personnel. Rescue is usually accomplished by ferrying rescuees from the stranded sub to the MOSUB, however, they can also be taken to a properly equipped surface support ship.The interior of the DSRV is composed of three spheres. The forward sphere is the “Control Sphere” where the DSRV’s pilot and copilot operate the vehicle. The two aft spheres (known as Mid Sphere and Aft Sphere) are used to seat the rescuees or to install equipment for additional operations. Maneuvering is accomplished using four thrusters and one main propeller.