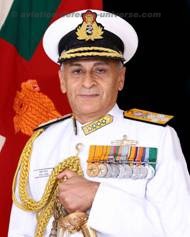 Admiral Sunil Lanba, PVSM, AVSM, ADC, Chairman Chiefs of Staff Committee and Chief of the Naval Staff is visiting Vietnam on a bilateral visit from 04 to 07 October 2017. The visit aims to consolidate cooperation between the Armed Forces of India and Vietnam and also to explore new avenues of defence cooperation.

During his visit, the Chairman, Chiefs of Staff Committee and Chief of the Naval Staff will hold bilateral discussions with His Excellency, Mr Nguyen Xuan Phuc, Hon’ble Prime Minister of Vietnam, His Excellency, General Ngo Xuan Lich, Hon’ble Defence Minister of Vietnam, Senior Lieutenant General Phan Van Giang, Chief of General Staff and Vice Minister of National Defence, Vietnamese Armed Forces, and Rear Admiral Pham Hoai Nam, Commander-in-Chief of the Vietnam People’s Navy. In-addition to holding important bilateral discussions, the Admiral will also be visiting the National Defence Academy of Vietnam, where he will interact with student officers and faculty members and deliver a talk on the ‘Importance of Maritime Power’. He will also visit Vietnam People’s Navy ‘Naval Region 4’, Vietnam Naval Academy and lay a wreath at the Ho Chi Minh Mausoleum.

India has historical linkages with Vietnam that dates back many centuries, though the countries established formal diplomatic relations in 1972. Defence cooperation between India and Vietnam has been robust with the primary focus being Maritime Cooperation. India signed a Protocol on Defence Cooperation Agreement in 1994. The partnership was thereafter elevated to Strategic Partnership in 2007 and a MoU on Defence Cooperation between the countries was signed on 05 November 2009. A ‘Joint Vision Statement for 2015-20’ was signed by the respective Defence Ministers in May 2015 and the Strategic Partnership was elevated to a Comprehensive Strategic Partnership in September 2016, during the visit of the Hon’ble PM to Vietnam.

The Indian Navy cooperates with the Vietnam People’s Navy on many issues, which include operational interactions, training and exchange of Subject Matter Experts in various fields through the medium of Staff Talks. The Vietnam People’s Navy also participates in the ‘MILAN’ inter-Navy interactions organised at Port Blair by the Indian Navy. Warships from Indian Navy have been regularly visiting ports at Vietnam, with Indian Naval Ships Satpura and Kadmat recently making port call at Hai Phong from 23 to 27 September 2017. The Vietnamese Navy ship Dinh Tien Hoang, a Gepoard Class Frigate, also visited Visakhapatnam in February 2016, for participation in the ‘International Fleet Review – 2016’.