Mumbai. 06 March 2017. It’s the end of an era for the Indian sea power today. The longest serving warship of the world which is neighbour’s envy and India’s pride, INS Viraat was decommissioned by the Indian Navy.

Amidst nostalgia and with moist eyes , INS Viraat, the second Centaur-Class aircraft carrier in service which has spent 30 years in the Indian Navy and 27 years in the Royal Navy, was bid adieu at the Naval Dockyard, Mumbai. 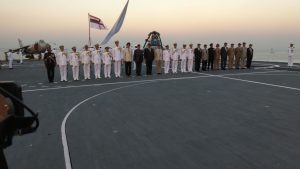 Under the Indian Flag, the ship has clocked more than 22,622 flying hours by various aircraft in the past three decades and has spent nearly 2252 days at sea sailing across 5,88,287 nautical miles (10,94,215 KM). This implies that Viraat has spent seven years at sea, circumnavigating the globe 27 times. Since her inception, she has had a total of 80,715 hours of boilers running.

‘Mother’, as she was fondly referred to in the Navy, had been commanded by 22 Captains since 1987. She was the Flagship of the Navy since her inception. Around 40 Flag officers including five Chiefs of Naval Staff were raised and groomed in her lap. Her legacy under the Royal flag was no less. As HMS Hermes, she was commanded by 13 Captains of the Royal Navy. Her role in Operation Mercy in 1974 and the Falklands War in 1982 are now textbook references for future navies.

At the decommissioning ceremony the Naval Ensign and Commissioning Pennant was lowered for the last time onboard INS Viraat at sunset and a glorious era in the history of the Indian Navy came to a nostalgic end. 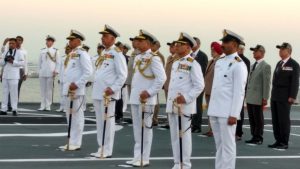 It  was attended by more than 1300 personnel who have served on board INS Viraat. Admiral Sir Philip Jones, KCB, ADC, First Sea Lord and Chief of Naval Staff of Royal Navy, Vice Admiral Vinod Pasricha, PVSM, AVSM, NM the commissioning Commanding Officer of INS Viraat were the guests of honour, while Admiral Sunil Lanba, PVSM, AVSM, ADC, Chief of the Naval Staff, was the Chief Guest for the ceremony. To commemorate “30 years of Glorious Service to The Nation” by INS Viraat, a Special Postal Cover was released by the Chief Guest on the occasion.

The ship leaves a long legacy of its military accomplishments. Apart from playing  a major role in Operation Jupiter in 1989 during the Sri Lankan Peacekeeping operation, she also saw action during Op Parakram in 2001-2002, post the terrorist attack on  Parliament. The ship was instrumental in honing the art of flying operations from a carrier deck in the Navy, which also resulted in seamless induction of INS Vikramaditya and its integration with the fleet. 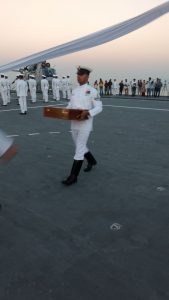 INS Viraat was fitted with a 14° ski jump to operate the Sea Harrier, a reinforced flight deck, and 1.2 inches (3 cm) of armour over the magazines and machinery spaces. The magazine capacity includes at least 80 lightweight torpedoes. The vessel retains commando transport capability for up to 750 troops and carries four LCVP landing craft in the aft section. In a wartime scenario, the ship can embark up to 26 combat aircraft and the ship is suited for supporting amphibious operations and conducting ASW operations.

In 2006, the Indian Navy started the ‘Limited Upgrade Sea Harrier (LUSH)’ program by upgrading up to 15 Sea Harriers in collaboration with Israel by installing the Elta EL/M-2032 radar and the Rafael ‘Derby’ medium-range air-to-air BVR missile.

The fleet also consisted of Kamov Ka-31 Helix-B airborne early warning aircraft and Kamov Ka-28 Helix-A helicopters. All Sea Harrier operations from the deck of INS Viraat ceased on 6 May 2016 following the retirement of Harrier fleet.

The carrier participated in various international joint exercises like Exercise Malabar (USA), exercise Varuna (French), Naseem-Al-Bahar (Oman Navy). She has also been an integral element of all annual theater level exercises (TROPEX). The last operational deployment of Viraat was for the International Fleet Review (IFR 2016) off Vishakhapatnam in Feb 2016. And after thirty years Viraat sailed into sunset.