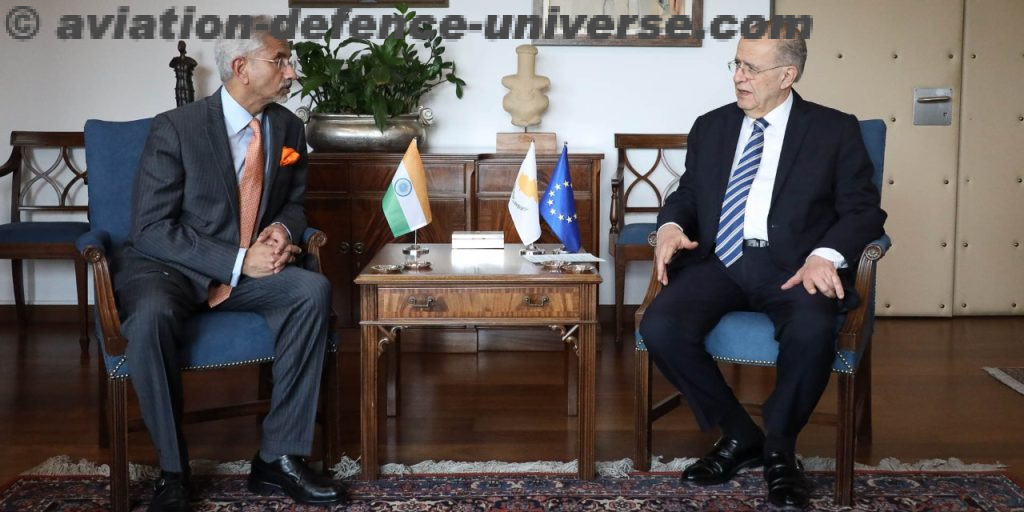 Nicosia/New Delhi. 29 December 2022 .  It is a moment of  comradiere for both India and Cyprus as Indian Foreign Minister Dr. S Jaishankar decided to end his 2022 bilateral relationship with a visit to reliable friend and partner Cyprus. And it was reciprocated with same warmth by Foreign Minister of Cyprus Ioannis Kasoulides.

“Today’s meeting demonstrates our commitment towards deepening our bilateral cooperation. India-Cyprus partnership is one of immense importance. It is rooted in our shared values of democracy, diversity, pluralism and respect for law. The strategic aspects of the relationship have gained a new meaning in recent years, reflected in our bilateral engagements. The exchange of views on the various crucial challenges facing the international community today was particularly useful. In growing our own ties and working with other partners, we are both guided by shared values and common principles. I take this opportunity to once again reiterate our principled position on the Cyprus Issue. The Republic of India reiterates its commitment for a Bi-communal, Bi-zonal federation based on UN Resolutions as the solution to the Cyprus issue,” Dr. S Jaishankar. 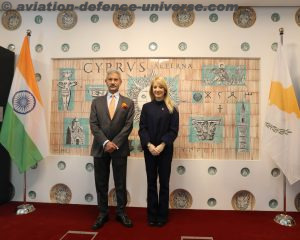 “It is with great honour and pleasure, that I welcome in Cyprus a good friend and colleague, the External Affairs Minister of India, Dr. Subrahmanyam Jaishankar. Cyprus and India are bound by our parallel historical experiences, such as the anti-colonial movement and our common paths to independence. The excellent level of relations between our two countries is also anchored by our shared vision for a world of peace, freedom, democracy and the rule of law. Today’s meeting was yet another reaffirmation of the excellent relation strengthened during the past 60 years of diplomatic relations between Cyprus and India. This solid partnership continues to diversify and deepen at all levels. People to people contacts have shaped a naturally strong, longstanding bond of friendship,” stated Kasoulides. 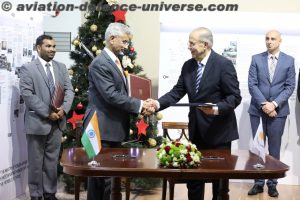 Both the Ministers agreed that in the course of  their meetings they had the opportunity to go over the full spectrum of  bilateral relations but also on a wide range of other global and regional issues of common interest. “We welcome the strong momentum in our bilateral cooperation, but as always, we looked at ways to further strengthen our ties, in fields such as trade, commerce, investment, maritime affairs, tourism and education. In this regard, it is our intention to continue our annual political consultations, which are held uninterruptedly for the last 3 years. We believe that this consultations mechanism between our two Foreign Ministries provides a solid platform for dialogue, creating common understanding and enabling us to coordinate our efforts,” they stated.

“Today we have signed 3 important agreements, with the aim to foster our cooperation in effectively addressing issues of mutual concern. The MoU on Defence and Military Cooperation will help develop the relevant dialogue. Furthermore, today with the International Solar Alliance Agreement, we join a collective platform, along with a number of other countries, that aims to address an issue that affects the globe, that of the energy transition. We have also signed a Declaration of Intent on Migration and Mobility which demonstrates our willingness to start a substantive dialogue with the aim of concluding an agreement that will tackle the issue of illegal migration and facilitate mobility in a proper manner,” they informed. 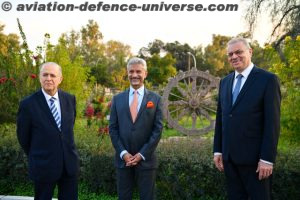 “We also exchanged information and ideas on how our countries can contribute more effectively to the promotion of peace and the strengthening of stability in our wider regions. In this context, I briefed the Minister on the trilateral cooperation mechanisms that Cyprus has established, together with partners in the Eastern Mediterranean region, designed to foster synergies and understanding to the benefit of all. As a global power with an important and stabilizing role in the neighbourhood of South Asia, India sets an example with its wisdom and leadership, so that peace, security and stability may prevail.I grasped today’s opportunity to extend in person our heartfelt gratitude and sincere appreciation for India’s longstanding principled stance in our continued efforts for the reunification of Cyprus, expressed by your country’s support in the UN Security Council, on the issue of Varoshia and the resolutions for the renewal of the UNFICYP’s mandate,” said the Cypriot Foreign Minister.

He added, “the political obstacles that emerged as a result of the partition of India stand as a historical example that serves as a guide to our efforts to reach a comprehensive settlement in Cyprus. As we have seen with the case of India, the country’s partition was just the beginning of a perilous journey and certainly not the end. Therefore, a two-state solution for Cyprus and its people cannot be accepted. In this regard, I thanked my Indian friend for their support in our efforts to reach a viable and comprehensive settlement, in line with relevant UN Security Council resolutions and International Law.” 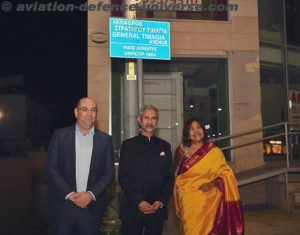 Furthermore, he expressed  appreciation for India’s substantive contribution throughout the years through its participation in UNFICYP, with military and police personnel. “Cyprus had 3 Indian Commanders of the UN Peacekeeping Mission in Cyprus: General Gyani, General Thimayya, who served in Cyprus until his passing in 1965 and General Dewan Prem Chand whose tireless efforts during the Turkish invasion to protect civilians, evacuate foreign diplomatic staff and safeguard the airport in Nicosia, will never be forgotten. Our island, having one of the longest standing UN Peacekeeping missions deployed on our territory, we thank India for the service and sacrifice of its peacekeepers, ” he said.

They also touched upon a number of regional issues, such as the situation in Ukraine and Afghanistan. Particularly for Ukraine, they expressed  concerns on the severe political, economic and humanitarian implications of the ongoing war and the global spillover on food and energy security. Both the leaders agreed on the necessity to intensify the efforts of the international community, to achieve a diplomatic solution that would end the suffering of the people and restore peace and stability.

Last but not least, they discussed the framework of the EU-India relations, which over the years have evolved to a strategic partnership with both sides jointly working together to address common challenges, to promote peace and security, as well as effective multilateralism. 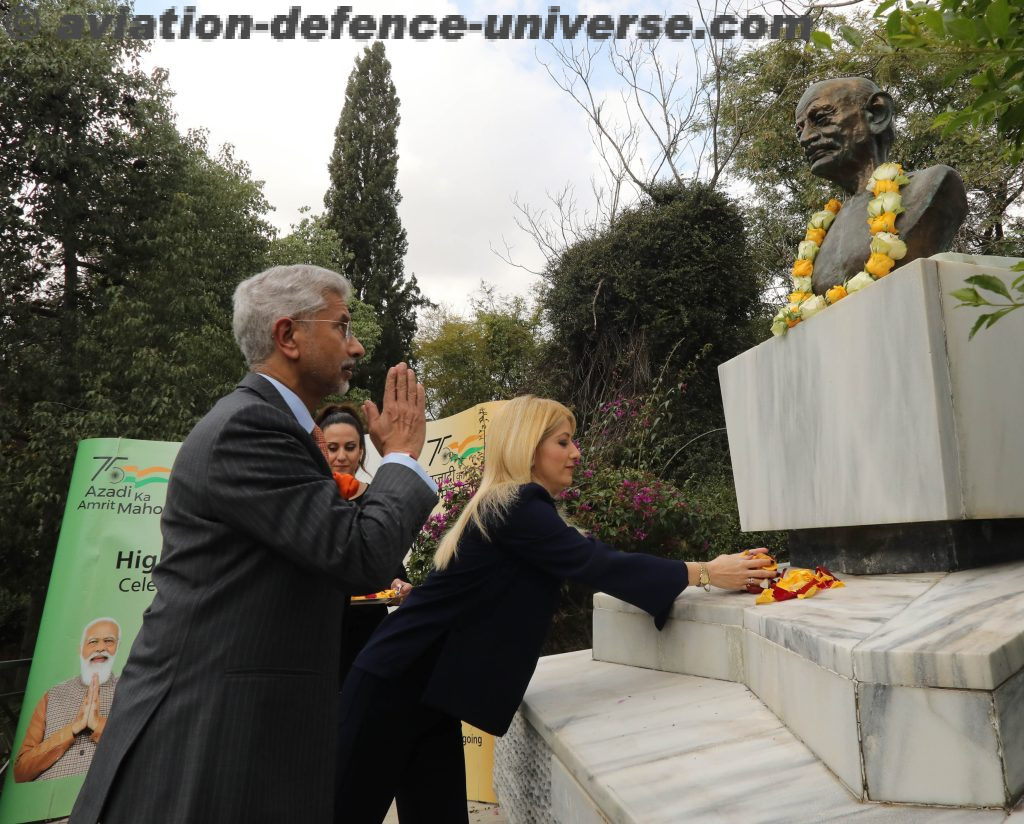