Indian  Artillery  committed to the force, the fight and the fire 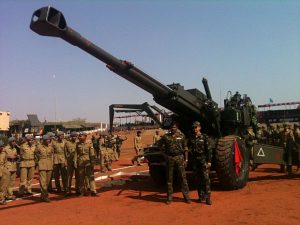 New Delhi. 28 September 2016. It was in an upbeat mood  that the Regiment of Artillery, the second largest Arm of the Indian Army celebrates 189th Gunners’ Day today.  Indian Army is all set to buy 145 BAE Systems 155 mm/39-caliber lightweight howitzers (M777) from the United States via the Foreign Military Sales (FMS) route for about USD750 million. The force is also ready to induct an indigenously development 155 mm towed howitzer,  Dhanush, which will be the Indian Army’s first new 155 mm howitzer.

Amidst celebrations it is just apt to remember that the day has a special significance in the annals of the history of the Regiment of Artillery as the first Indian Artillery Unit, 5 (Bombay) Mountain Battery equipped with 2.5 inch Guns, was raised on this day in 1827.

The Regiment has been the backbone  of 1947-48, 1962, 1965, 1971 and 1999 recently.  The regiment of Artillery has also undertaken major steps towards modernisation, both in terms of equipment and support systems under “Make in India” initiative of the Government of India , despite a two decades of gap in procurement since Bofors.

The Regiment of Artillery is an operational arm (a regiment/corps) of the Indian Army. Formerly part of Royal Indian Artillery (RIA) of British Indian Army which itself traces its origins to the formation of Bombay Artillery in 1827. It was later involved in extensive service in the First World War, in East Africa, Gallipoli, Mesopotamia and Palestine . 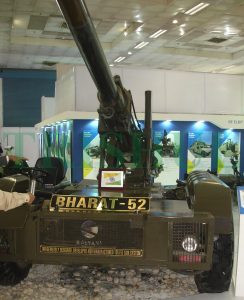 Today it is the second largest arm of the Indian Army, and with its guns, mortars, rocket launchers, unmanned aerial vehicles, surveillance systems, missiles and artillery firepower it constitutes almost one-sixth of its total strength.

Historically Mughal Emperor Babur is popularly credited with introduction of Artillery in India, in the Battle of Panipat in 1526, where he decisively used gunpowder firearms and field artillery and defeated the much larger army of Ibrahim Lodhi, the ruler of the large North Indian Delhi Sultanate, thus not just laying the foundation of the Mughal Empire but also setting a precedent of all future battles in the subcontinent. However evidence of earlier use of gun by Bahmani Kings in the ‘Battle of Adoni’ in 1368 and King Mohammed Shah of Gujarat in fifteenth century have been recorded.

The East India Company raised the first regular company of Artillery in 1748, with a small percentage of Indian Gunners called Gun Lashkars, Tindals and Serangs. A few Indian mountain artillery batteries, officered by the British, were raised in the 19th century and formed part of the Royal Artillery. The Royal Indian Artillery (RIA) of the British India Army, was raised on September 28, 1827, as a part of the Bombay Army, a presidency army of the Bombay Presidency. It was later renamed as 5 Bombay Mountain Battery, and participated in the First Anglo-Afghan War (1839–1842).

The Indian Rebellion of 1857 was sparked off in Meerut on 10 May 1857. Many of the Indian personnel of the Bengal Artillery were involved in the mutiny and the three battalions of foot artillery then in existence were all disbanded in 1862.[3] Subsequently all Indian artillery units were disbanded except for four mountain artillery batteries of the Bombay Army[4] and four field batteries of the Hyderabad Contingent. Major Richard Keatinge of Bombay Artillery was awarded the Victoria Cross in 1858 for his service during the Indian Rebellion.

The Defence Acquisition Council (DAC), headed by Defence Minister Manohar Parrikar, agreed that 25 of the long-awaited M777s would be procured in completed form. The towed guns are meant for deployment by the Indian Army along the 4,057 km Line of Actual Control (LoAC) with China. The two countries went to war in 1962 over this un-demarcated mountainous frontier, which continues to be one of the world’s longest-running territorial disputes.

The remaining 120 howitzers would be built at the BAE Systems Assembly, Integration & Testing (AIT) facility that is being transferred from the US and established locally in partnership with Mahindra Defence in the National Capital Region. 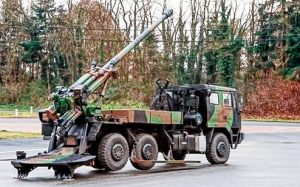 The Dhanush was developed by India’s Defense Research and Development Organization (DRDO) under the project name Advanced Towed Artillery Gun System (ATAGS). The project was initiated under the DRDO in 2010. The Dhanush’s specifications represents a considerable improvement over the Haubits FH77, a considerably older system. The Dhanush features a larger 45 mm caliber, compared with the 39 mm caliber of the Bofors artillery gun. Its range is significantly greater, at 38 km compared to the FH77’s 27 km range.

Each Dhanush unit will require a crew of six to eight artillerymen to operate and is capable of firing eight rounds per minute. According to a report citing Indian Army officials, the aggregate performance improvement of the Dhanush over the FH77 is around “20-25 percent.” The Dhanush outperforms the older Swedish gun on a range of measures, including “range, accuracy, consistency, low and high angle of fire and shoot-and-scoot ability.”

Who says India cannot make its artillery guns. The Kalyani group had recently at the DefExpo 2016 exhibited the first prototype system–the Bharat Ultra-Light Howitzer that could pose direct competition against the M777 Howitzers, made out of Titanium. Bharat Ultra-Light Howitzer has been developed using light weight exotic materials like Titanium and Aluminium based alloys.  The company also has a system ready for testing before the end of this year. 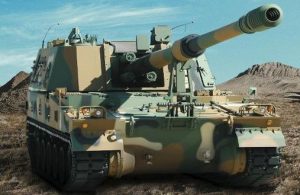 The K9 VAJRA-T howitzer, pitched by L&T in partnership with Samsung, is also hopeful of manufacturing the gun. L&T’s Pune facility will produce the Vajra which beats its Russian competitor on several technical grounds, including rate of fire, accuracy and mobility trials.

TATA unveiled a new wheeled howitzer artillery system a few years back. The newly developed 155mm Caliber Howitzer is mounted on an eight-wheeled TATA military truck to enhanced mobility. The prototype of the howitzer has been produced by the company which is around 55% indigenous.

Ashok Leyland has gone ahead and made the Field Artillery Tractor (FAT) 6×6 on Super Stallion platform which will function as a Common Gun Tower for all artillery guns. This versatile FAT provides the Army unprecedented flexibility in rapid deployment, and utilization of artillery resources. Ashok Leyland recently won orders of over 450 vehicles on Super Stallion platform from the Indian Army.

French firm Nexter Systems, Larsen & Toubro and Ashok Leyland Defence Systems have entered into an agreement to collaborate for the Indian Army’s Mounted Gun System (MGS) artillery programme. The consortium led by L&T as the prime contractor will customise for Indian conditions, the Caesar artillery system fitted onto a 6×6 Super Stallion chassis from Ashok Leyland.

Punj Lloyd might have suffered a set back when its partner Singapore Technologies got banned but it bounced back by emerging victorious in awarding of a Rs 670-crore contract for upgrading the army’s ageing Zu-23-2B anti-aircraft guns, capable of engaging both aerial and ground targets.

The firm has partnered with Slovakian defence company EVPU to convert the mechanical Soviet-era gun, developed in the late 1950s, into an automatic system. The plan is to upgrade 468 guns.The guns would be upgraded over a period of four years. The contract covers maintenance of the guns for 15 years.

Under the army’s Field Artillery Rationalisation Plan (FARP) formulated in 1999, the Regiment of Artillery had decided to standardise the calibre of its guns at 155 mm so as to ensure commonality of ammunition. The artillery plans to acquire a total of 2,820 guns of all types to replace obsolescent guns and to equip the new regiments that will form part of 17 Corps, the Mountain Strike Corps now under raising. AFTER a decade of neglect under the two UPA regimes, military modernisation appears to be picking up pace again under the new NDA government.