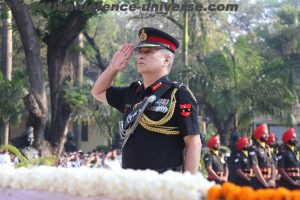 Pune. 16 December 2022. Vijay Diwas 2022 was celebrated  with the customary pomp and fervor at Southern Command War Memorial, Pune. This day marks the splendid victory achieved by India over Pakistan 51 years ago. The “GREATEST VICTORY EVER” saw the emergence of Bangladesh as an independent nation and India rose as a regional power to reckon with. With this decisive victory over a formidable opponent the Armed Forces of India once again affirmed themselves as a strong component of National power.

The 1971 Indo Pak warwas forced upon India due to the widespread genocide of people of East Pakistan carried out by an oppressive military regime under General Yahya Khan of Pakistan. The war, which was short and intense, was fought on both Eastern and Western fronts. The 13 day war resulted in the complete surrender of Pakistani forces and the creation of Bangladesh. The Indian Armed Forces reigned supreme over the Pakistani military in the battle field. During the war, Southern Command valiantly defended the borders of the nation against all actions by Pakistani Army 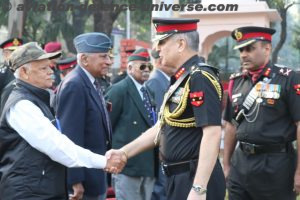 The notable battles which were fought in the area of responsibility of the Southern Army included the famous battle of Longewala where Pakistan’s armoured forces were destroyed by resolute Indian troops. The raid on Pakistani town of Chachro carried out by soldiers of the renowned 10 Para Commando Battalion led by Lt Col (Later Brig) Bhawani Singh and capture of Parbat Ali were famous military operations by Southern Command. These battles have gone down the annals of history as fine examples of grit, determination and bravery of our soldiers. A wreath laying ceremony was conducted at Southern Command War Memorial to pay homage to brave soldiers, airmen and sailors of the Indian Armed Forces who did not think twice before laying down their lives to protect the sovereignty and freedom of our great nation.

The commemorative wreath was laid by Lieutenant General Manjit Kumar, Chief of Staff, HQ Southern Comd on behalf of all ranks of HQ Southern Command. The ceremony was attended by military personnel of Pune Station as well as Veterans of the Indian Army, Air Force & Navy, who participated in the operation in Indo Pak War 1971. The silence observed by all present, echoed skywards to the martyrs of this great nation as an apt tribute to their steely resolve to defend India at all costs.