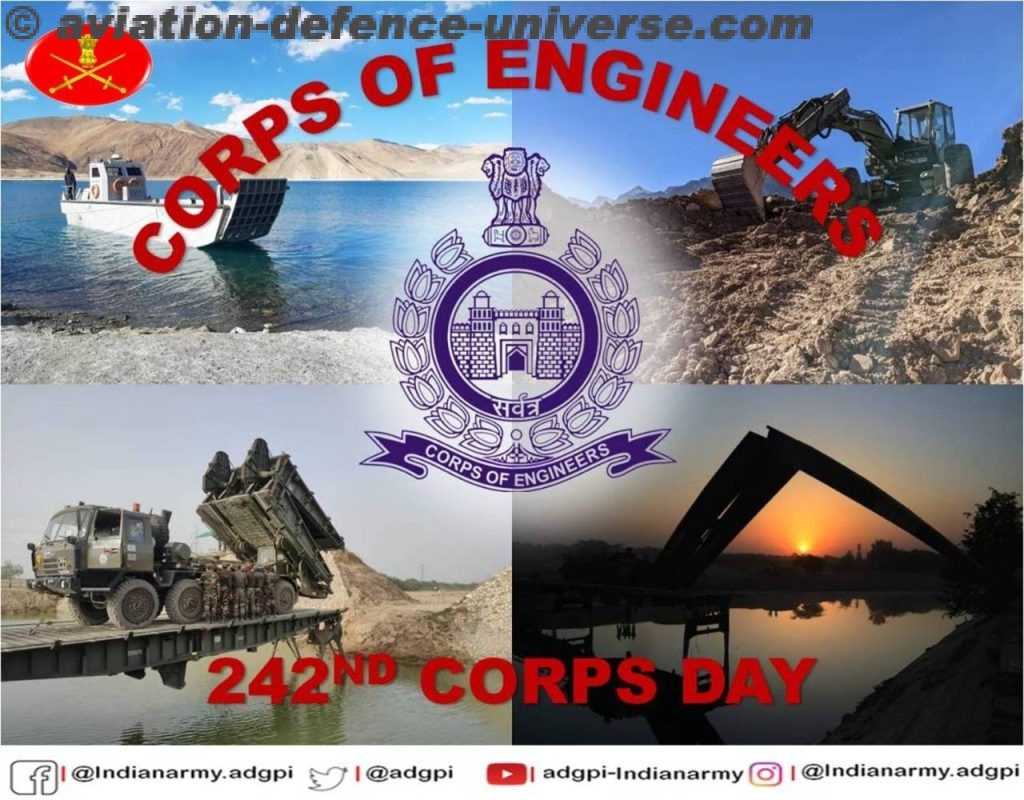 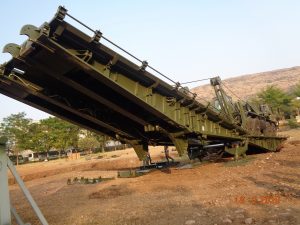 New Delhi. 18 November 2022. 90th anniversary and this is a special year for the Indian Army’s Corps of Engineers. The man at the helm of the Indian Army is a sapper. There was no slip between the cup and the lip this time and history did not repeat itself. Lt. General Manoj Pande, a Bombay Sapper Officer, is the present Indian Army Chief. For the first time in the history of Indian Army and India, an officer from the Corps of Engineers has the reins of the force which needs no introduction only accolades- the Indian Army. The nearest Indian Army came to getting a Sappers Chief was when Lt. General PS Bhagat was Vice Chief but the government of the day decided to give Lt. Gen Bewoor a nine months extension thereby shattering all hopes of Sappers’ to see Lt Gen Bhagat as the next Chief. Exactly 49 years after this, the Corps of Engineers has given the top leader to Indian Army. 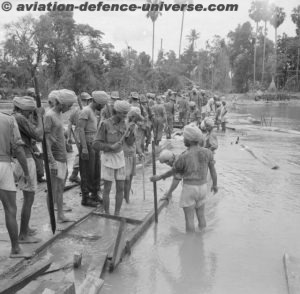 The Sappers need no introduction. They lead the way, they make the way, they pave the way and the infantry  walks in. From making roads, to building bridges, to creating infrastructure, to laying and defusing mines, the engineers of the Indian Army are always on the forefront of activity, at the scene of action and on the battlefield in war and in the face of an unknown enemy  in no-war-no-peace situation , like today’s. And they are the first casualties of war because they are the ones who lead to smoothen task for the infantry and so are the first to face the enemy. The Indian Army Corps of Engineers has a long history dating back to the mid-18th century. The earliest existing sub -unit 18 Field Company of the Corps dates back to 1777 while the Corps officially recognises its birth as 1780 when the senior most group of the Corps, the Madras Sappers were raised. Till 1911, the Sappers also had the duty of passing battlefield messages. Between 1911 and 1920, they handed this task to a batch of their own kinsmen who then formed the Corps of Signals. The Sappers also contributed the first batch of airmen when the Indian Air Force was raised in 1932. From 1942-1945 officers of the Indian Railways were recruited into this Corps to participate in Britain’s Burma Campaign.

Forts abound in the subcontinent, and to the forts the main defences withdrew for a protracted stand. On being invested, the siege (heavy) artillery including trench mortars or bombards went at it. The real work, not for the faint-hearted, went to the sappers who had to do the accurate digging of trenches, usually covered or zigzag, to cover one’s approach to the point of assault. 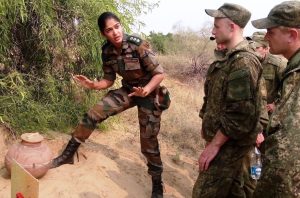 In war, Combat Engineers provide mobility to their own forces by constructing bridges, tracks and helipads; on the other hand the Corps denies the same to the enemy by creating obstacles such as laying mine-fields and demolition of bridges. In any army the Engineers are the most versatile component. They are trained specialists, yet when the occasion arises they fight as infantry, which is one of their roles. In the post-Independence Indian Army the role of the Corps of Engineers has been even more varied and significant: besides supporting the field forces in four major wars against our neighbours, they have played a large part in nation-building roles such as constructing an extensive network of strategic roads to open up our undeveloped border areas, aid to the civil in times of national calamity. 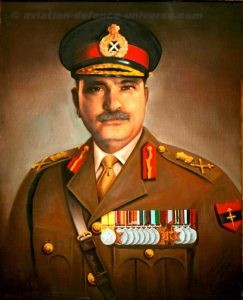 Legendary Lt Gen PS Bhagat of the Corps remains the first Indian Officer to have won the Victoria Cross in the Second World War. Another first in the same war, Subedar Subramaniam was awarded the George Cross. Later, during operations in Kashmir soon after Independence, Major Rama Raghoba Rane was awarded the Param Vir Chakra for making a passage through enemy mine fields while crawling in front of a tank. The Corps of Engineers has to its honour  Param Vir Chakra, Ashoka Chakra, Padma Bhushan, Param Vishisht Seva Medals,  Maha Vir Chakras, Kirti Chakras,  Padma Shri, not to forget the Param Vishisht Sewa Medals, Ati Vishisht Seva Medals, Vir Chakras, Shaurya Chakras,  Yudh Seva Medals and many other awards.

9 Engineer Regiment became one of the youngest Engineer Regiment in world history to enter the battlefield and got as many as 12 decorations including 01 Mahavir Chakra, 03 Vir Chakra, 04 Sena Medal, 04 Mention in Dispatch at the “Battle of Basantar” in 1971. 107 Engineer Regiment gained an Indian Institute of Bridging Engineers award for constructing a bridge in Himachal Pradesh in 2001. 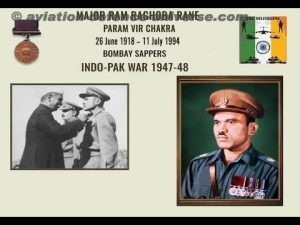 The Military Engineering Service, which is an important part of the Corps has played a crucial role in Nation Building. It provides MES cover not only to the three Services, namely, Army, Navy and Air Force but also Defence Research & Development Organisation and Ordinance Factories. A number of prestigious and time bound projects have been completed over the years. The Border Roads Organisation has made its own contribution to the nation by constructing national highways, airfields, buildings and bridges. The Border Roads, by constructing a large number of roads in once inaccessible areas of the Himalayas, Rajasthan and North Eastern States have contributed significantly to their economic development.The Corps has always been in the forefront in aspects related to Aid to Civil Authority. Rescue teams were deployed in Jalandhar and provided relief when a four storied building of ‘Sital Industry’ collapsed in the Industrial Area in Jalandhar. Tunnels were created in the rubble to extricate precious lives and save people from death inside the debris.

The Corps was also instrumental in opening the lines of communications and cleaning of mud slides during the Sikkim Earthquake in Sep 2011. Large number of engineer task forces and BRO dets were pressed into service to assist civil administration to restore normalcy in the State. 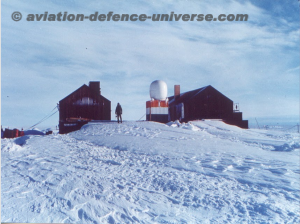 In the recent floods in North East and Jammu & Kashmir, relief  and rescue teams were pressed into action to save precious life and material. Large number of people stranded in remote areas were evacuated to safe locations and assisted civil administration  in supply of essential commodities.

An equal opportunity military organisation, Corps of Engineers has women officers both in field and peace locations and in regiments and static formations. Although the path these women have chosen is tough, they have proved that they have the spirit, the courage and the will to carry on, imparting technical expertise to the army.

True to the motto SARVATRA, the Corps of Engineers has excelled in multifarious activities in war and peace. In peace time the Sappers have always been in the forefront in rendering aid to the civil authorities during natural calamities such as floods and earthquakes. Today the Corps turns 90 with élan and inspires generations of engineers to respond to the call of the nation. 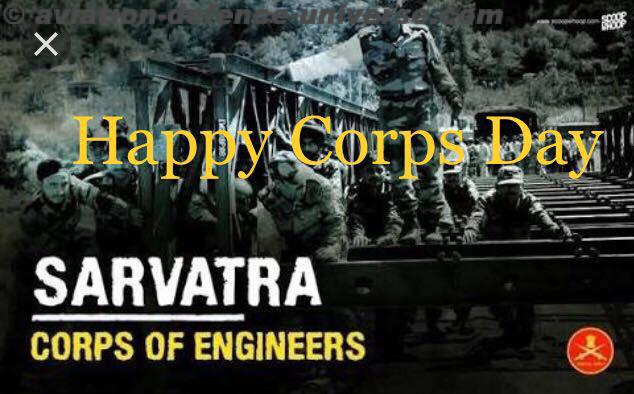