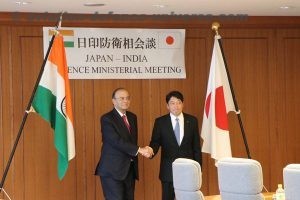 The Ministers exchanged views and ideas with the aim to further strengthen defence and security cooperation under the framework of the “Japan-lndia Special Strategic and Global Partnership”. They expressed satisfaction at the continued deepening and diversification of bilateral defence cooperation since the signing of the bilateral Memorandum on Defence Co-operation and Exchanges in September 2014 and the two Defence Framework agreements signed in December 2015.

The Ministers exchanged views on the current security situation in the Indo-Pacific region. They condemned in the strongest terms North Korea’s nuclear test of 03 September 2017, which  is in violation of its international obligations and commitments, including under relevant UNSC resolutions and called upon DPRK to cease such action which adversely impacts peace and stability of the region and beyond.

The Ministers noted that regular interactions at all levels, in particular the establishment of Staff Talks at the level of the three Services, have enhanced mutual understanding. The Ministers underlined their intention to explore opportunities for enhancing exchanges and decided to promote cooperation in many areas.

(2) Exchanges between Japan Ground Self Defence Force and Indian Army.

The Ministers welcomed the progress in the Army to Army Staff talks in November 2016 and agreed to develop active exchanges in the fields of PKO, Counter-Terrorism and Humanitarian Assistance and Disaster Relief (HADR), as key areas of common interest for the two countries.

Japan Ground Self Defence Force (JGSDF) would invite Indian Armed Forces personnel to participate in the HADR exercise conducted by JGSDF as Observers.

In the context of enhanced co-operation between the two ground forces the Ministers decided to explore a joint field exercise in the field of counter-terrorism between the Indian Army and the JGSDF in 2018.

(3) Exchanges between Japan Maritime Self Defence Force and the Indian Navy.

The Ministers expressed satisfaction at the success of Japan-India-US Trilateral Maritime Exercise MALABAR 2017 in July 2017 and confirmed their intention to further deepen and advance the objectives of this Exercise. Minister Onodera expressed his intention to have state-of-the-art Japanese assets including P-1 to participate in the MALABAR 2018. Minister Jaitley welcomed this proposal.

The Ministers noted the importance of bilateral training interactions between Indian Navy and Japanese Maritime Self Defence Force (JMSDF). The two sides will consider inclusion of Anti-Submarine Warfare (ASW) training to expand cooperation. In addition the ministers agreed to pursue exchanges and training by ASW aviation units such as P-3C. The Japanese side proposed to invite Indian Navy personnel to mine-countermeasures training held by JMSDF.

The Ministers welcomed the participation of Vice Chief of Staff, JASDF in “Aero India-2017” in February 2017. They also welcomed the visit of Indian Air Force helicopter crews to JASDF’s Air Rescue Squadron in Hyakuri, expanding bilateral air-to-air exchanges in the domains of aviation safety and air crew exchanges.

The Ministers expressed their intention to seek further opportunities to enhance cooperation by enabling visits of their aircraft to each other’s air bases.

The Ministers appreciated personnel exchanges between the two sides by means of representation at defence educational and research institutions. They expressed satisfaction over successful bilateral exchanges in UN Peace Keeping involving the Centre for United Nations Peacekeeping of India and the Japan Peacekeeping Training and Research Centre.

(6) Cooperation in Defence Equipment and Technology.

The Ministers endorsed the importance of enhancing interaction between governments and defence industries of the two countries to encourage equipment collaboration including defence and dual-use technologies. They commended the progress made in discussions to identify specific areas of collaboration in the field of defence equipment and technology cooperation including in the framework of the Joint Working Group on Defence Equipment and Technology Cooperation. They noted the effort made by both countries regarding the cooperation on US-2 amphibious aircraft.

They welcomed the constructive engagement between Acquisition, Technology and Logistic Agency (ATLA) and Defence Research and Development Organisation (DRDO) and agreed to commence the technical discussions for research collaboration in the areas of Unmanned Ground Vehicles and Robotics.

The Ministers commended the conduct of the first-ever meeting on defence industry cooperation held by ATLA and Department of Defence Production (DDP) in Tokyo, which witnessed significant participation of government entities and companies of both countries. They expressed their expectation that this meeting will lead both countries to future defence equipment and technology cooperation and enhance interaction between governments and industries of both countries. Minister Jaitley briefed about recent policy reforms in the defence manufacturing sectors in India which offer opportunities for foreign industries to play an active role.