India-Iran Chabahar agreement : A step ahead in bilateral ties

New Delhi, 24 May 2016. The world looks on and he nation welcomed the signing of the long envisioned agreement on developing the key Chabahar port between India and Iran as a landmark development and a big leap forward in co-operation between Iran and India.

Prime Minister Narendra Modi’s outreach to Tehran has infused vigour into the momentum to develop connectivity, infrastructure and in India’s energy security goals. Chabahar port, located in the Sistan-Baluchistan Province on Iran’s southern coast, is of great strategic importance for India. India and Iran had in 2003 agreed to develop Chabahar on the Gulf of Oman outside the Strait of Hormuz, near Iran’s border with Pakistan. 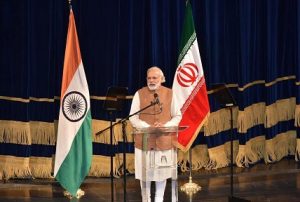 The bilateral agreement to develop the Chabahar port and related infrastructure signed by Prime Minister Narendra Modi and Iranian President Hassan Rouhani, underlines the extraordinary strategic opportunities that present themselves for India in the region. The signing of commercial contract for the Chabahar Phase 1 will open a route to land-locked Afghanistan and cut transport costs/time by third. The development of the port for which India will provide $500 million will help Indian companies enhance engagement in Iran and gain access to Afghanistan & Central Asia. In the long run Chahabar will also serve as the point of origin for the proposed Iran-Oman-India pipeline.

A multiplier effect rests on the possibility that other international investors may also see the rationale of this important investment, thus paving the way for creation of a strategic bulwark that facilitates greater flow of people and goods among the three countries, as well as in the region and contributes to economic growth of Afghanistan.
The 12 MoUs signed between the two countries cutting across culture, science & technology, exchange of info& knowledge and many another aspects of economic engagement, as a significant effort to build enduring partnership.

“Today, we are all witnessing creation of history. Not just for the people of our three countries, but for the entire region. To build bonds of connectivity is the most basic of human urges. Today, we seek to fulfil it. We are grateful to Excellency Rouhani for hosting this unique event. Thank you President Ashraf Ghani, for your presence. It truly holds a special significance. It is a privilege to be here. Excellency Rouhani, President Ghani and I have just held detailed discussions on a range of issues. The agenda for economic engagement is a clear priority for us. We stand together in unity of our purpose. To carve out new routes of peace, and prosperity is our common goal. We want to link with the world. But, better connectivity among ourselves is also our priority. It is indeed a new dawn for the region.
Iran, Afghanistan and India are deeply aware of the richness and reality of our ancient links. Through centuries, art and culture, ideas and knowledge, language and traditions have formed a common bond between us. Even through turmoil of history, our societies never lost touch with each other. Today, we meet to write new chapters in our engagement. 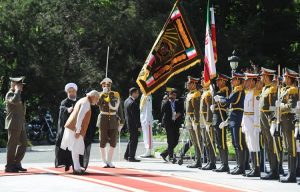 The Agreement on the establishment of a Trilateral Transport and Transit Corridor signed just a while ago can alter the course of history of this region. It is a new foundation of convergence between our three nations. The corridor would spur unhindered flow of commerce throughout the region. Inflow of capital and technology could lead to new industrial infrastructure in Chahbahar. This would include gas based fertilizer plants, petrochemicals, pharmaceuticals and IT. The key arteries of the corridor would pass through the Chahbahar port of Iran. It’s very location, on the mouth of Gulf of Oman, is of great strategic significance. Afghanistan will get an assured, effective, and a more friendly route to trade with the rest of the world. The arc of economic benefit from this agreement would extend beyond our three nations. Its reach could extend to the depths of the Central Asian countries. When linked with the International North South Transport Corridor, it would touch South Asia at one end and Europe at another. And, studies show that as compared to the traditional sea routes, it could bring down the cost and time of the cargo trade to Europe by about 50%. Over time, we could even look to connect it with the strong sea and land based routes that India has developed with the Indian Ocean Region and South East Asia. 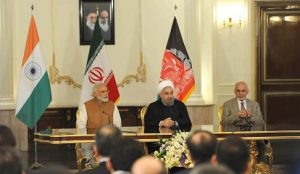 The world of 21st century offers unique opportunities. But, it also poses its own set of challenges. Today, the nature of global engagement requires an attitude more suitable to this century, not the mind set of the century gone by. Today, the watch-words of international ties are trust not suspicion; cooperation not dominance; inclusivity not exclusion. This is also the guiding philosophy and driving spirit of the Chahbahar Agreement. This will be a corridor of peace and prosperity for our peoples. Motives of economic growth, and empowerment would drive it. It will build our security without making others vulnerable. It would break barriers among our nations and encourage new benchmarks of people-to-people contacts. And, help us to eventually build what we all desire and deserve – a friendly and healthy neighbourhood.

The world around us is changing in fundamental ways. And, the lack of comprehensive connectivity is not the only challenge that limits our national growth. Political turmoil and undercurrents of economic stress continue to spread in West Asia. In the Indo-Pacific, rise a mix of political competition and economic opportunities is putting pressure on the existing Asian order. Global economy is yet to fully come out of uncertainty and weakness. Our present growth and future prosperity is under threat from the spread of radical ideas and physical terror. Amidst this landscape, our three countries are blessed with the most potent resource—our youth. Our three nations are estimated to have more than 60 percent of their population under 30 years of age. They are an asset in our national and regional development. We want them to walk the road to knowledge and skills; industry and enterprise. And, not fall victim to the path of guns and violence. I am confident that economic fruits of the Chahbahar Agreement will expand trade, attract investment, build infrastructure, develop industry and create jobs for our youth. The Agreement will strengthen our ability to stand in mutual support against those whose only motto is to maim and kill the innocents. Its success will be a positive vote for peace and stability in the region.

It is my strong belief that trade and transit routes should only be a starting point of our journey to greater connectivity. In my vision, the full spectrum of connectivity agenda between Iran, Afghanistan and India should span:

• from culture to commerce;
• from traditions to technology;
• from Investments to IT;
• from services to strategy; and
• from people to politics.

In a way, it is a pledge to:
• Realize the imperative of better connectivity;
• Establish peace and create stability;
• Build economic prosperity and engineer new trade ties;
• Curb radicalism and remove shadows of terror; and
• Break barriers and spread sweetness of familiarity among our people.
History will look back at this effort with nothing but approval and admiration.”