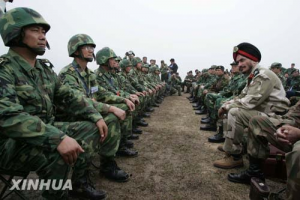 New Delhi.02 June 2016. From conflict to cooperation, the concept of Chindia seems to be the new mantra in the Sino-Indian relationship today. When leaders of India & China meet they represent more than one third world population, two fastest growing economies, having biggest militaries and leading consumers of energy, consequently their relations cordial or hostile effect not only the region but the whole world. 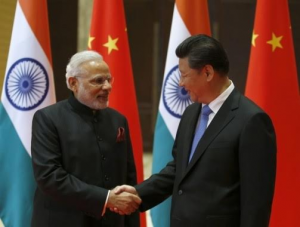 Both the countries have several outstanding issues including unresolved border disagreements, China’s military assistance to Pakistan including building of USD 46 billion China-Pakistan Economic Corridor (CPEC) which connects Gwadar port to Xinjiang province of China. The corridor passes from Indian territory of Jammu & Kashmir which is illegally occupied by Pakistan and India already lodged a strong protest on it. China also protests the presence of Dalai Lama in India as he keeps Tibet issue alive not only in India but in international arena too.
Several high level visits were exchanged between India and China in the recent past. Chinese President Xi Jinping visited India in 2014 while Modi visited China in 2015 and now Indian President Pranab Mukherjee recently paid a four day visit from May 24 to 27. Indian Vice President Hamid Ansari also visited China in 2014. Besides this Modi would again be visiting Hangzhou, Zhejiang on September 4 &5 to participate in G-20 summit and Xi Jinping would visit Goa from October 15-16 to take part in Brazil, Russia, India, China, South Africa (BRICS) summit. 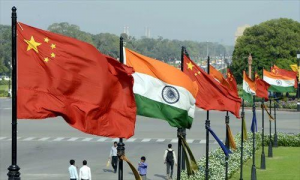 China’s move of jeopardizing Indian initiative of inclusion of Masood Azhar, Chief of Jaish-e-Mohammad, an ISI sponsored terrorist outfit based in Pakistan, in the blacklist of United Nations has also soured Sino-India relations.
The analysts mention that although in past India advocated strongly for the permanent seat for China in United Nations Security Council but now China does not support India’s candidature for permanent seat in Security Council and it also obstructs India’s efforts to join Nuclear Suppliers Group.
There is difference between the vision of India and China on South China Sea and India does not endorse Xi’s vision of Asia where China wants to play leading role.
Both the countries have matured leadership and economically deprived population; hence there is acute need of economic growth. The trade which was USD 2 billion in 2000-2001 has enhanced to USD 71 billion last year. There is overall growth of 23 times in trade in last 14 years which is a big achievement. Nonetheless it is less than the fixed target and can grow manifold.
Modi who visited China several times as Chief Minister of Gujarat has rightly adopted a blended policy, now India is competing China, inculcating friendship with countries hostile to China, strengthening ties with neighbours, modernizing the armed forces, improving infrastructure in border areas but also keeping China in good disposition and high level visits demonstrate it. 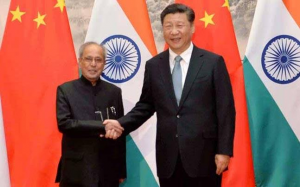 The present trade is heavily in favour of China hence sincere efforts should be made not only for getting China’s investment but India’s exports to China should also be amplified.
India should try to emphasize old cultural ties especially Buddhism between two Asian giants. India should also develop infrastructure in Buddhist religious places so that more Chinese can visit, as in China the impact of communism is dwindling and people are searching solace in spirituality. Not only this, emphasis on Buddhism would belie the myth that China inherited a superior civilization.
Both the countries should be cautious as Western world is averse to India China friendship. If both countries inculcate true friendship they would emerge as a mighty force and the developed countries would never like it.

Chinese media before the visit of Indian president rightly pointed out that Western media is maliciously trying to create differences between India and China on “Chabahar port” which will provide India transit routes to Afghanistan and Central Asian countries through Iran. Chabahar seaport is approximately 100 KMs away from Gwadar port and was developed by China. The mischievous Western media projected it as enmity between Elephant and Dragon which is unfortunate.

There is need to develop more people-to-people contact in all fields especially in economic field. Connectivity between India and China should increase and there must be more flights especially between Mumbai and Shanghai the economic capitals of their countries.

Visa regime should be simple and unproblematic so the people to people contact develops and the security agencies should not put unnecessary restrictions under the name of security.

Both countries lack trust with each other. In India there is a feeling that China instigates Pakistan to carry out terrorist activities so that India has to spend much time, energy and resources in internal security which hampers the overall economic progress of the country. Although at present the border dispute is not in the forefront but China has constructed roads, railway lines, aerodromes etc in the border areas which can be used at hour of need.

China has encircled India and developed close ties with Pakistan, Nepal, Myanmar and Sri Lanka. Bangladesh is also no exception. Although China has not actively participated during India Pakistan wars so far but in view of close relationship between China and Pakistan, the policy planners in India have to plan for the eventuality.
However India should acknowledge that China is an economic as well as military power with lot of surplus funds with better technology in several fields hence India should try to augment cooperation, trim down differences, inculcate healthy competition and reduce the chances of clash.
Both sides should try to resolve the thorny border issue amicably through negotiations, as it is a sensitive issue hence both the countries should deal it slowly. The 19th round of Special Representatives’ meeting held in Beijing in April 2016 was important as it was agreed in the meeting that border disputes are controlled and border areas remained peaceful. India should convey a message that China is its important neighbour and both the countries must inculcate a jointly advantageous relationship and India must welcome Chinese investment in all sectors.
India should also convince China that it has no intention to encircle it and India will not play US cards against China. India should be extra cautious because US and Japan may like to put India on the forefront against China but both these countries have multi-layered and much closer relationship with China than their associations with India.
(Jai Kumar Verma is a Delhi-based strategic analyst and a retired R&AW officer. The views in the article are solely the author’s. He can be contacted at [email protected])