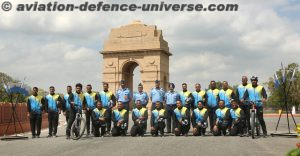 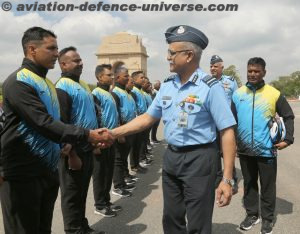 The cyclists faced the daunting task of covering 1100 kms in 16 days, culminating at National War Memorial, New Delhi on 15 August 2022 to commemorate the 75th year of Independence, ‘Azadi ka Amrit Mahotsav’ by paying tribute to our brave soldiers who made the supreme sacrifice during various wars after independence.

The broader aim of the expedition was to bolster the energy of the youth towards nationalism as the Air Warriors interacted with school children at various stages en-route. They also acted as a beacon to channelise the zeal and enthusiasm of the future leaders of the nation.

Spearheading the team from Indian Air Force was Group Captain AP Menezes, who is an avid cyclist, athlete and a national footballer.

The expedition has pedalled its way through the lofty peaks of Ladakh traversing through the high passes Tanglang La and Baralacha La before entering Himachal Pradesh and the plains of Punjab towards NCR, Delhi. The team was flagged in by Air Officer in Charge Administration, Air Marshal K Anantharaman VSM, on 16 Aug 22 at the National War Memorial.