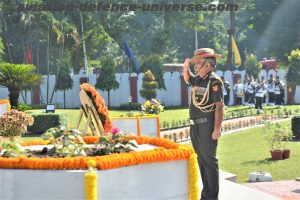 Kolkata, West Bengal. 01 November 2022.     Today on the occasion of 102nd Raising Day of HQ Eastern Command Lt Gen R P Kalita, UYSM, AVSM, SM, VSM, GOC-in-C Eastern Command laid wreath at Vijay Samarak to pay tribute to Bravehearts who made supreme sacrifice in the service to the nation and pledged complete support to the families of these valiant brave hearts and assured full support to them at all times.

On this momentous occasion, The Eastern Army Commander assured that the Command is operationally ready at all times and continues to develop its capabilities to face any present or future challenges. He conveyed best wishes to all officers, troops and defence civilian employees of HQ Eastern Command. Commending tireless efforts of all personnel of the HQ on the occasion of Command’s Raising Day, he called upon everyone to continue working with dedication and devotion in the true traditions of the Indian Army. 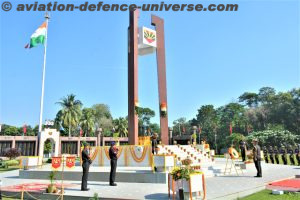 Headquarter Eastern Command was raised on 01 November 1920. The Command was raised at Lucknow under General Sir H Hudson, with territorial jurisdiction over Delhi, UP, Bengal, Bihar, Orissa and Assam. Thereafter owing to operational commitments, the Command Headquarters shifted to Barrackpore, Ranchi and Lucknow before permanently settling down in Fort William, Kolkata in the immediate wake of 1962 Sino – Indian War.

Eastern Command covers the geographical area spread over eight states overseeing 8129 kms of land borders of India, which constitutes 65% of all land borders. The Command is responsible for guarding borders with five countries, a task that it has carried out with distinction. It has also actively participated in all major wars fought by the Country. However, its crowning glory was 1971 War which led to the creation of a new nation “Bangladesh”. Over the years the “WARRIORS OF THE EAST” have time and again proved themselves as a formidable professional force capable of safeguarding the territorial integrity of the Nation and leading highly successful counter insurgency operations in the affected regions of North East. By its sustained efforts, many regions in Assam & Nagaland have been denotified of AFSPA. 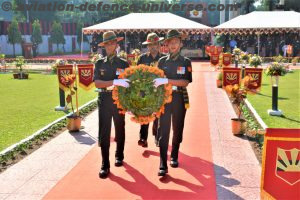 Eastern Command as the guardians of East has been involved at every level to bring in meaningful changes in the lives of the people through Operation Sadbhavana and Operation Samaritan schemes which have left an indelible impact on the lives of the local population. Be it humanitarian assistance, disaster relief operations or restoring law and order, the Command has acquitted itself in an exemplary manner reinforcing the Nation’s faith in its Army.