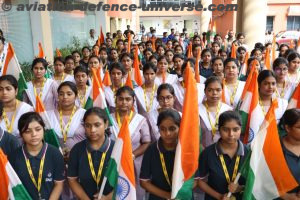 Kolkata. 08 August 22. Garden Reach Shipbuilders and Engineers Ltd., (GRSE), a Mini Ratna Category 1 Defence PSU and leading warship building company in India initiated their “Har Ghar Tiranga” program today under the aegis of Azadi ka Amrit Mahotsav. The celebrations started with the inaugural address by Dr. Dhrubajyoti Chattopadhyay, Vice Chancellor of Sister Nivedita University, followed by the distribution of national flags by the dignitaries to the students of the university. The dignitaries present on the occasion included RK Dash, Director of Finance, GRSE, and eminent personality Ms. Rituparna Sengupta.

In his address, Prof Dhrubajyoti Chattopadhyaya said “Our relationship with the flag has always been more formal and instituitional than personal. Bringing the flag home collectively as a nation in the 75th year of Independence thus becomes symbolic of not only an act of personal connection to the Tiranga but also an embodiment of our commitment to nation building which the Garden Reach Shipbuilders & Engineers Ltd is performing for many years. The idea behind this initiative is to invoke the feeling of patriotism in the hearts of the people and to promote the awareness about the Indian national flag”.

Speaking on the occassion, RK Dash said, “Har Ghar Tiranga” is a campaign under the aegis of Azadi Ka Amrit Mahotsav to encourage people to bring the Tiranga home and to hoist it in their homes to mark the 75th year of India’s Independence. This awareness program by GRSE is also an embodiment of our commitment to nation-building. Garden Reach Shipbuilders & Limited is the only shipyard which has given more than 100 ships to the Indian Navy and Indian Coast Guard.

Extending this campaign towards every citizen of Kolkata, GRSE is set to observe a week-long celebration beginning today and shall include distribution of the National Flags to all employees on 10 Aug 22, Swachtta Abhiyan at Victorial Memorial on 13 Aug 22, a ‘Quiz’ on India’s freedom struggle and flag hoisting at the residences of personnel to mark the 75th year of Indian Independence. Har Ghar Tiranga Utsav concludes with hoisting the Tricolour on Independence Day at all units of GRSE.

Har Ghar Tiranga is an initiative under the aegis of Aazadi Ka Amrit Mahotsav to bring out a personal connection for the Tricolor amongst every Indian. The campaign implores every Indian to hoist the Tricolor at their own homes from 13-15 August.