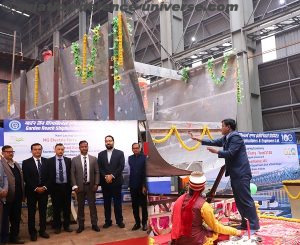 Kolkata (January 19, 2023): The keel of the first New Generation Electric Ferry for the Government of West Bengal was laid by Garden Reach Shipbuilders and Engineers (GRSE) Ltd in Kolkata on January 19, 2023. This zero-emission Ferry, designed by GRSE, is being built for the Government of West Bengal and is poised to revolutionise passenger transport across River Hooghly as well as the movement of vessels along National Waterways I. Shri Binod Kumar, Principal Secretary, Department of Transport, Government of West Bengal, graced the occasion as Chief Guest during the keel laying. Shri Rajanvir Singh Kapur, IAS, MD, WBTC, Shri R K Dash, Director (Finance), Cdr Shantanu Bose IN (Retd), Director (Shipbuilding), Shri Sanjay Dattatraya Panse, Independent Director, GRSE, Shri Sanjeeb Mohanty, Independent Director, GRSE, Shri Mihir Kumbhakar, ITS, Chief Vigilance Officer and other senior officials of GRSE were also present during the ceremony that marked a new chapter in the shipyard’s long and glorious history. Such ferries will potentially replace the diesel engine driven ferries that now operate on River Hooghly, bringing about a major transformation towards the reduction of carbon emissions.

In June 2022, a Memorandum of Understanding (MoU) was signed between the Government of West Bengal & GRSE for design & construction of the New Generation Electric Ferry. The 24-metre-long New Generation Electric Ferry designed by GRSE will be powered by a 210 Kilowatt per hour (kWh) liquid cooled Energy Storage Solution. It is ergonomically designed to carry 150 passengers in air-conditioned comfort and with no noise or engine vibrations, the Ferry will offer a smooth ride.

The Ferry will have twin screw propellers for greater maneuverability and a Catamaran Aluminium hull which will allow speeds upto 10 knots. It will have solar panels to augment power supply. It is being built to comply with latest classification society rules related to passenger safety.

During his welcome address, Cdr Shantanu Bose, Director (Shipbuilding), GRSE mentioned that The Next Generation Electric Ferry is a R&D effort by GRSE and it will be a technology demonstrator and green initiative for the Inland Waterways for West Bengal, other states, coastal & island territories of India. He also stressed that as we at GRSE, care for the environment, the lifecycle cost of this vessel is 20-30 % lesser compared to diesel powered vessel.

Congratulating GRSE on the occasion, Chief Guest for the ceremony Shri Binod Kumar stated that this is the first electric powered vessel for Government of West Bengal and these vessels are significant in terms of sustainable development. Shri Kumar also emphasised that we are majorly affected by global warming and pollution related to fossil fuels and this new electric ferry will play a major part towards green energy initiative as this will run on rechargeable electricity and solar energy. Highlighting the importance of this vessel in the River Hooghly, he stressed that both the sides of river are densely populated and this vessel will prove to be the cheapest, time saving and a popular mode of transportation.

The last month has been a busy one for GRSE, the only shipyard in the country to have delivered 108 warships to the Indian Navy and Indian Coast Guard. Two more have been exported to the Republic of Seychelles and Mauritius. Over the last few days, GRSE has delivered a Fast Patrol Vessel to the Indian Coast Guard. This ship was commissioned at GRSE on January 12, 2023. The shipyard also flagged-off a passenger-cum-cargo Ocean going ferry – the first of its kind built in the country – for the Cooperative Republic of Guyana. GRSE also laid twin keels for Anti Submarine Warfare Shallow Water Craft (ASW SWC) at its Rajabagan Dockyard. Eight of these warships are being built by GRSE.

In 2022, GRSE also became the only defence shipyard in the country to be honoured with the Raksha Mantri Award for designing the most silent ship of its class – an ASW SWC that has now been launched and is being fitted out. GRSE is also building three Advanced Stealth Guided Missile Frigates for the Indian Navy under the latter’s project 17A. Two of these have already been launched. Four Survey Vessels (Large) are also under construction at the shipyard which is also working on an export order for six patrol boats for the Government of Bangladesh.