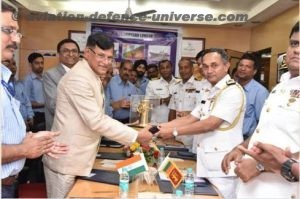 The vessel will be the largest and most advanced ship in the Sri Lankan Navy fleet. This is the fourth Offshore Patrol Vessel (OPV) delivered in the current financial year. The ceremony was attended by High Commissioner of Sri Lanka Chitranganee Wagiswara, Chief of Staff of Sri Lanka Navy Rear Admiral N B J Rosayro, Chairman & Managing Director of GSL Rear Admiral (Rtd) Shekhar Mital, directors and senior officials of Sri Lankan Navy, Indian Navy, Indian Coast Guard and GSL.

Speaking on the occasion, Rear Admiral (Rtd) Shekhar Mital said “This state-of–the-art and largest ship in the Sri Lanka Naval fleet will help meet the increasing requirement of the Sri Lanka Navy for undertaking policing and patrolling of its vast Exclusive Economic Zone.” He further added “Great care, attention and forethought have gone in ensuring that this vessel is built to highest standards and the same has been validated in the harbour and sea trials, where ship has achieved all design specifications, to the satisfaction of our special friend Sri Lanka Navy.”

The SLOPV Project for building two large size ships is one of the most significant defence cooperation between India & Sri Lanka and one of the largest export contracts, being executed by GSL currently for any friendly country. The keel of the vessel was laid on May 9, 2015 and was launched on May 2, 2017. It is creditable for the shipyard to complete this significant export project and deliver the vessel 25 Days ahead of contractual schedule. With this, the shipyard has succeeded in reducing build period of 2,500 Tonnes OPV to nearly three years from over five years taken till about three years ago. Sri Lanka Navy Ship (SLNS) Sayurala, the first AOPV of the series delivered in July 2017 ahead of contractual schedule, is performing exceedingly well and has received positive feedbacks for GSL for the build quality and state-of-the-art machinery.

Goa Shipyard has a unique distinction of delivering all the ships ahead of contractual schedule and has been officially adjudged as the ‘Best Performing Shipyard’ by Ministry of Defence, besides being the largest exporter shipyard of the country. Turnover of GSL has grown nearly three times with profits rising from (-) Rs 60 crore to over Rs 220 crore in the last four years.