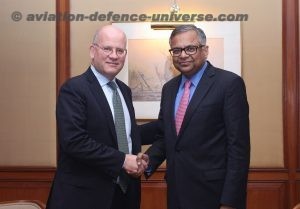 Tata group is a leader in the Indian defense and aerospace sector, and we look forward to working together to meet the growing demand for LEAP engines. Our collaboration in building innovative technologies will support the ‘Make in India’ vision of the Indian government,” said John L. Flannery, Chairman and CEO of GE.

Under the strategic partnership, GE Aviation and Tata Sons’ subsidiary, Tata Advanced Systems Limited (TASL), will join forces for manufacturing, assembling, integration and testing of aircraft components. A new Centre of Excellence (COE) will be established to help develop a robust ecosystem for aircraft engine manufacturing in India and build related capabilities.

TASL is focused on providing integrated solutions for Aerospace, Defense and Homeland Security. It has become a significant player in the global aerospace market, becoming the premier manufacturing partner for global original equipment manufacturers (OEMs). It has capabilities throughout the aerospace value chain from design to full aircraft assembly.