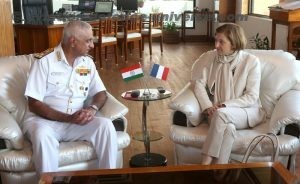 Relations between France and India are being accorded priority by both sides as seen by the recent high-level interaction between the two countries. Defence cooperation has also witnessed increased emphasis by both sides. 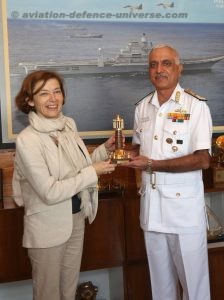 Interaction between the Indian Navy and the French Navy has, over the years, nurtured into a strong partnership based on mutual interests. Naval cooperation had progressed most encouragingly in recent years and the increasing scale of operational interaction is indicative of a growing understanding between the two navies.

She also visited the Mazagon Docks Ltd where the Scorpene Submarines are being manufactured by DCNS now Naval Group for Indian Navy.
Share this on WhatsApp