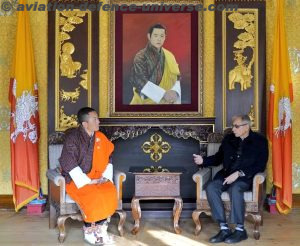 Lyonchhen (Dr) Lotay Tshering. He reaffirmed the warm bonds of friendship India shares with Bhutan & assured Lyonchhen of India’s firm commitment to partner with Bhutan as per the priorities of the government & people of Bhutan.

Foreign Secretary Kwatra reaffirmed the close bonds of friendship India shares with Bhutan and conveyed India’s firm commitment to partner with Bhutan based on the priorities of the government and people of Bhutan, and taking forward the bilateral ties into new frontiers of partnership. The Bhutanese side shared their plans and expectations with regard to Bhutan’s 13th Five Year Plan in the context of ongoing transformation initiatives in Bhutan. 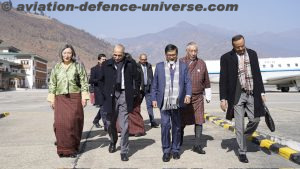 “It was a pleasure meeting Mr. Vinay Kwatra on his maiden official visit to Bhutan as the Foreign Secretary of India. We reviewed various issues of mutual interest and also held preliminary discussions on the next Plan,” tweeted Bhutan’s Foreign Minister Dr. Tandi Dorji.

India and Bhutan share an exemplary bilateral relationship characterized by utmost trust, goodwill and mutual understanding at all levels, strong bonds of friendship and close people-to-people ties. The visit of Foreign Secretary reinforced the long-standing tradition of regular high-level exchanges between the two countries to discuss all issues of mutual interest. 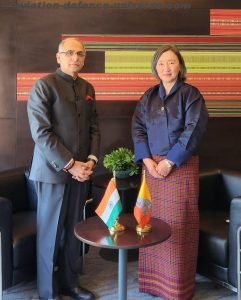 Bhutan and India enjoy strong bonds of friendship marked by trust, understanding, goodwill and mutually beneficial cooperation. His Majesty Jigme Dorji Wangchuck, the Third King of Bhutan, and India’s first Prime Minister, Pandit Jawaharlal Nehru, were the chief architects who laid strong foundations for Bhutan-India relations. Successive leaders of the two countries have nurtured and further strengthened the special relations over the past many decades, and it is today a model of relations between two neighbours.

India provides significant assistance to Bhutan’s socio-economic development, the scope and substance of which have grown substantially since 1961 when Bhutan embarked on the process of planned development with the launching of its first Five Year Plan (FYP). Areas of engagements encompass collaboration in both multilateral arena and bilateral fields such as cultural exchanges, education, trade, hydropower and socio-economic development. Cooperation in the development of the hydropower sector in Bhutan is the centrepiece of the mutually beneficial economic cooperation between Bhutan and India.

Today, India is Bhutan’s largest development and most important trading partner both as a source and market for its trading goods and commerce. Moreover, as a landlocked country, all its third-country imports and exports transit through India. India is the biggest market for several of Bhutan’s exports, including electricity, dolomite, ferrosilicon, and semi-finished products. 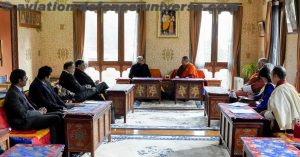 One of the hallmarks of Bhutan-India relations is the tradition of regular exchange of high-level visits. His Majesty The King has undertaken several visits to India. In the recent past, His Majesty The King visited India as Chief Guest for the Republic Day celebration in 2013. In 2014, at the invitation of the President of India, His Majesty The King and Her Majesty the Queen were the first State Guests to stay at the refurbished wing of the Rashtrapati Bhavan. Among the most remarkable of these visits was the State Visit in November 2017 to India when His Majesty and Her Majesty were accompanied by His Royal Highness Gyalsey Jigme Namgyel Wangchuck. 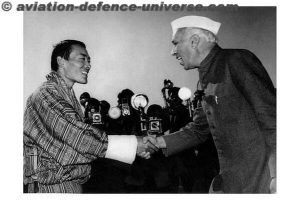 At the invitation of Prime Minister  Narendra Modi, H.E. Lyonchhen Dr. Lotay Tshering visited India twice: State Visit from 27-29 December 2018, and to attend the Swearing-in-Ceremony of Prime Minister Modi on 30 May 2019. Bhutan also receives, at regular intervals, visits at the levels of Head of State and Head of Government from India. It was a deep honour for the people of Bhutan to welcome H.E. Shri Narendra Modi, Prime Minister of India, for his second visit to Bhutan from 17-18 August 2019. Bhutan was his first foreign trip as Prime Minister in June 2014 and among the first after his re-election in 2019. In November 2014, the Late President Pranab Mukherjee made a State Visit to Bhutan within a few months after Prime Minister Modi’s visit.