First prototype of Ka-62 helicopter takes to the air 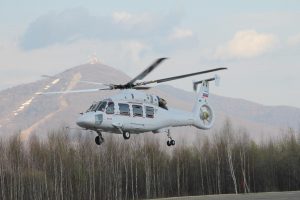 Moscow / April 29, 2016. The first prototype (OP-1) of the medium multirole Ka-62 helicopter took off at Russian Helicopters’ Progress Arsenyev Aviation Company (part of State Corporation Rostec) on April 28.  The lift in a hover mode was part of the factory flight testing and was completed successfully.
The OP-1 Ka-62 was launched to evaluate its overall performance and to test its main power supply systems and avionics.  The helicopter was operated by test pilots from the Kamov Design Bureau, which is the main developer of the Ka-62. Previously, the rotorcraft has successfully passed a series of tests in a ground-based racing mode.
“This is a very significant event for the Russian Helicopters holding company and a due result of our work”, – said the holding company’s CEO Alexander Mikheev. – “The new Ka-62 will complement the civilian versions of the honoured and most produced helicopter in the world – Mi-8/17, and it will fill a high demand niche in the class of helicopters with a 6-7 ton take-off weight.”
The Ka-62 is designed for a wide range of tasks. Its main purposes include transporting passengers, rescue operations, and use in the oil and gas sector. With a spacious and comfortable cabin, this helicopter is ideal for corporate travel. The Ka-62’s high power to weight ratio allows to operate it in a wide range of altitudes. The Ka-62 can be used in hot climates and above water.