Odolena Voda, Czech Republic. Prototype of Embraer’s KC-390 stopped in the Czech Republic for a day on its return from Farnborough International Airshow. Aero is involved in development and manufacturing of the aircraft and Czech Republic is one of the industrial partners in the KC-390 project.
Aero signed the risk-sharing contract in 2011 during the LAAD Defence & Security exhibition in Rio de Janeiro and it is responsible for design and manufacturing of wing fixed leading edge and for manufacturing of all cabin doors, cargo ramp and rear fuselage of the aircraft. The project of development of KC-390 in Aero is financed by the Czech export bank and insured by EGAP. 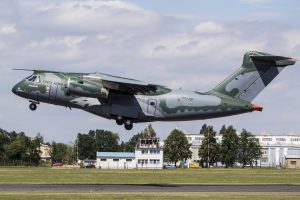 The aircraft arrived to the Vodochody Airport at Saturday 16 July at 3 pm. On Monday, it performed two demonstration flights for the representatives of the Czech Republic, including two Deputy Ministers of Defence and Deputy Minister of Foreign Affairs. The KC-390 prototype left Aero on Tuesday 19 July at 10 am.
KC-390 is one of the most important cooperation programs of Aero Vodochody. 150 technicians including engineers and hundreds of workers of Aero are involved in this project and with the dimensions of 6,5 x 4,5 x 3,3 metres – the rear fuselage is the largest aerostructure ever made in the Czech Republic. The aircraft has successfully completed its first flight in February 2015 and it is now in the flight test campaign which should last around two years.
Embraer expects to receive the certification of the KC-390 jet by the end of 2017 with first deliveries of the aircraft scheduled for the first half of 2018. 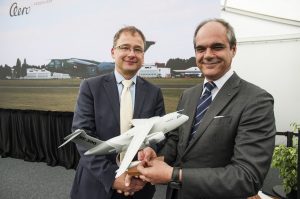 KC-390 is a tactical transport aircraft designed to set new standards in its category while presenting the lowest life-cycle cost on the market. It can perform a variety of missions such as cargo and troop transport, troop and cargo air delivery, aerial refuelling, search and rescue and forest fire fighting. Equipped with IAE V2500 turbofan engines, the latest avionics, a rear ramp and an advanced cargo handling system, the KC-390 will provide excellent operational productivity and will be capable of transporting a payload of up to 23 tons, including pallets, helicopters, armoured wheeled vehicles, and troops (80 soldiers or 64 paratroopers).
The performance of the KC-390 is benefited by a modern fly-by-wire control system with integrated technology that lowers the workload of the crew and increases the safety of its operation. Furthermore, the KC-390 can refuel other airplanes in flight, with the installation of two removable internal fuel tanks. The aircraft can also be refuelled in flight, thus providing greater flexibility for longer missions. An advanced self-defence system increases the aircraft survival capability in hostile environments.
AERO Vodochody AEROSPACE a.s. focuses on the design and manufacturing of military and civil aircraft and is the largest aviation manufacturer in the Czech Republic and one of the oldest aerospace companies in the world. In the field of civil aviation, Aero partners with many of the world’s largest manufacturers in a diverse range of projects.  More recently, Aero became a full partner in several risk-sharing programs, taking responsibility not only for the production of structures but also for development. In the field of military aircraft, Aero is historically the largest jet trainer manufacturer in the world and it has been a reliable long-term partner to many of the world’s air forces. The main proprietary products of AERO Vodochody are L-159 light attack aircraft and L-39NG, new generation of legendary jet trainer.
Share this on WhatsApp