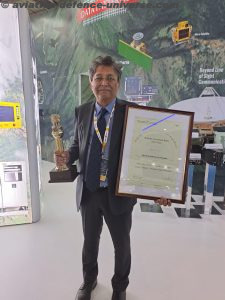 Data Patterns (India) Limited received The Raksha Mantri Award for excellence for the year 2021- 2022. The entry for awards under different categories was called for in the backdrop of the ongoing Defence Expo2022. The award was given to Data Patterns for their best innovation in the category of Medium scale industry.

Data Patterns put forward its development of the Precision Approach Radar, commonly referred to as PAR. This radar is utilized to assist military aircraft to land, especially in the context of poor visibility due to adverse weather conditions.

The PAR was developed for the Ministry of Defence program requirements, catering to the needs of the Indian Air Force and the Indian Navy. This phased array digital beam-forming radar was developed in a short span of 18 months, just in time to be fielded for the evaluation trials. The product performed satisfactorily in all aspects of the customer requirements.

Data Patterns innovation was able to outperform competing entries from Indian and foreign-developed radars. As a result, a contract was awarded by the MoD through the Indian Navy and Indian Air Force, for the supply of a total of 9 radars. The entire radar was developed by Data Patterns and successfully demonstrated. The company’s faith in sponsoring the development of the radar, on the basis of confidence in its own R&D and production infrastructure has been richly rewarded.

Data Patterns is currently delivering the radars to various locations in India. The project is being executed precisely on schedule.

“Data Patterns is pleased and honoured to be the first private company in this category to receive a Raksha Mantri award. We feel it is ample recognition of the 37 years of hard work put in by the organization in developing the competence required for this achievement. We thank the selection committee as well as the Defence Minister “Honourable Raksha Mantri, Shri Rajnath Singh Ji” for selecting Data Patterns for this award” adds Mr. Srinivasagopalan Rangarajan, Chairman & Managing Director, Data Patterns (India) Limited