Cyprus may become a German aircraft base 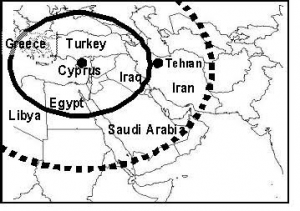 By Chaitali Halder
Bonn, Larnaca. 17 May 2017. Cyprus might become the base for German aircraft supporting the anti-IS mission. The ‘Andreas Papandreou’ air base in Cyprus could be the possible relocation site from Turkey, said Foreign Minister of Cyprus Ioannis Kasoulides. This will be in addition to Jordan and Kuwait which are also been made German relocation bases to combat IS.

Germany’s defense minister Ursula von der Leyen informed that eight locations where it could move aircraft supporting the anti-IS mission are being considered It may be recalled that Turkey has been blocking German lawmakers from visiting troops at the Incirlik base. This is in response to Germany having granted asylum to some soldiers Turkey believes were involved in a failed coup attempt last summer.

Cyprus is only 65 kilometers from Turkey.The location is also important for air-borne missions into the Middle East and Persian Gulf. The Eurofighter Typhoon EF 2000 has a maximum combat range (radius) of about 1,400 kilometers, and this can be doubled with mid-air refueling. Thus, in good weather and with mid-air refueling, the entire Middle East and most of the Persian Gulf is within maximum combat range (radius) from Cyprus. Again it is Cyprus’ proximity to this strategic region that enables this. 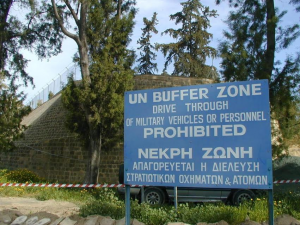 It is an island in the Eastern Basin of the Mediterranean Sea. It is the third largest island in the Mediterranean (after the Italian islands of Sicily and Sardinia) and the world’s 81st largest island by area. It is located south of Asia Minor, the Anatolian peninsula of the Asian (or Eurasian) mainland (part of Turkey), so it may be included in Western Asia or the Middle East. Cyprus is close to Southern Europe, and Northern Africa, and has had lengthy periods of mainly Greek and intermittent Anatolian, Levantine, Byzantine, Turkish, and Western European influence.
Geopolitically, the island is divided into four segments. The Republic of Cyprus, the internationally recognized government, occupies the southern 60% of the island, and has been a member state of the European Union since 1 May 2004. The Turkish Republic of Northern Cyprus, diplomatically recognized only by Turkey, occupies the northern one-third of the island, around 37% of the territory. The United Nations-controlled Green Line is a buffer zone that separates the two and it is about 4%. Lastly, two areas—Akrotiri and Dhekelia—remain under British sovereignty for military purposes, collectively forming the Sovereign Base Areas of Akrotiri and Dhekelia (SBA). The SBAs are located on the southern coast of the island and together encompass 254 km2, or 2.8% of the island.

For Germany Cyprus is one of the choices but Turkey is an old friend. It is a more important ally than Greece and Cyprus despite not being a part of the EU. With a huge Turkish minority and upcoming elections in Germany, Angela Merkel cannot afford to let her relations left strained with Turkey. And this shifting of air base from Turkey to Cyprus might reflect in the votes for the immigrants who stay in Germany but still feel strongly for their nation. Even if Cyprus is strategically better a choice for Germany it cannot afford to diminish relationship with Turkey.