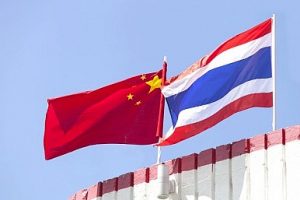 Pattaya. 09 June 2016. THERE must be plenty of raised eyebrows as “Blue Strike 2016”, a joint military exercise between China and Thailand, concluded at a training ground in Chanthaburi Province of Thailand on June 7, 2016.

About 500 Thai and 270 Chinese soldiers gathered at Sattahip Naval Base, about 30 kilometers south of the popular tourist city of Pattaya, in the province of Chonburi. The event included the Marine Corps of both armies lining up in formation under the hot sun. Very eye-catchingly, the armaments and equipment include helicopters, rocket launchers, 122-milimetre Howitzer-equipped tanks, an amphibious transport dock, inflatable boats, speedboats, a range of guns and other hardware. Other activities covered military and naval exercises focused on humanitarian relief, forest fighting, survival training and combined live-fire drills, the Bangkok Post reported. 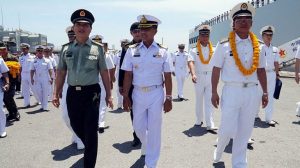 For starters, the size of the joint event has grown since the last one held in 2012, when only 150 Chinese navy personnel participated.

Admiral Prathumsuwan commended the “efficient command of commanding officers and hard training of officers and soldiers of the two sides”. He said that different units of the two sides worked together and achieved great success. The joint training is not only a bilateral exchange of experience and skills, it also further promoted the friendly relations between the two navies and the two peoples, he added.

From the sidelines, China wants to scale up the drill with the navy to cover combat exercises for the sake of its strategy against the United States in the region, as well as to solidify ties with regional allies in case the South China Sea conflict intensifies, military strategists said. 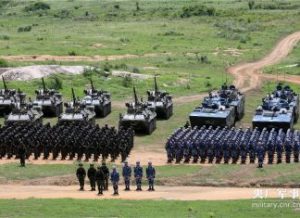 Both air forces held their first ever joint exercise last year, and Thailand had also selected China as the country to build the country’s submarines. Thailand also inked an agreement with China to purchase MBT-3000 main battle tanks, with deliveries expected to begin before the end of the year.

Beijing has also been quick to take on the new opportunity to embrace Bangkok’s new military rulers, with a flurry of high-level meetings since the May 2014 coup. Washington, notably, has repeatedly called for a swift return to democracy and criticised the coup.

But with the Americans’ very strong ties with Asean, Washington has kept its critical distance as it is also wary about pushing away a regional ally, particularly towards China’s sphere.

The US response to the coup have had strong-armed tactics in suspending some military aid in the aftermath of the military takeover. But it went ahead with “Cobra Gold” earlier this year, one of the largest military exercises involving several countries from the region that takes place every year in Thailand.

Analysts told the Bangkok Post that Thai Prime Minister Prayut Chan-ocha, the head of the junta that seized power two years ago, and his allies, in both the cabinet and military, are generally much more open to warmer military ties with Beijing than previous generations of Thai generals.

Take note, too, that Thailand’s military embrace of China is also in contrast to many other South-east Asian nations particularly rattled by Beijing’s island-building in the disputed South China Sea. Thailand makes no claims to the area.

Likewise, Singapore has no claims to the South China Sea row, and in late May, the Republic of Singapore Navy (RSN) and China’s People’s Liberation Army (Navy) concluded a new joint naval exercise, hailed as a “milestone in the bilateral defence relationship”, by Singapore.

Both navies “can learn from each other and deepen professional knowledge to strengthen mutual trust and understanding,” said RSN Fleet commander Colonel Lew Chuen Hong, in highlighting the growth in professional interactions between RSN and the Chinese navy.

“Exercise Maritime Cooperation reflects our common goals and beliefs, and is a new achievement of the exchanges and interactions between both our navies,” said Commander South Sea Fleet Rear Admiral Shen Jinlong from the Chinese navy. The new bilateral naval exercise underscores warm and growing ties between the two countries, as they mark 25 years since the establishment of diplomatic ties this year. 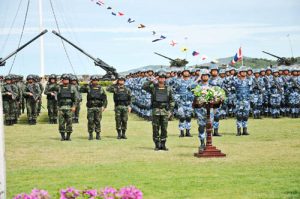 For Thailand, known as the “Land of the Smiles”, they may be giving the Western world a run for the military-money as there’s been a significant rise in the number of military contracts awarded to China. And in this instance, it would be of strategic interest for both allies to work together collectively in fighting against terrorism and up keeping regional stability, growth and peace.

The thorny issue of the South China Sea is being ramped up by those in the US and the UK who accuse China of causing tension in the region. They proclaim the principle of free navigation and overflight but in reality their prejudice and partiality will only increase tension.

Indeed, a rising China seems determined to be the dominant player in Asia, and the United States vows to retain its power in the Pacific. But observers say relations between the two countries are at their lowest point in 15 years with China’s military expansion in the South China Sea the most prominent point of friction.

While the South China Sea saga looks like a prolonged sea affair, the good news is that, like “Blue Striker 2016”, more military interactions between China and the Asean countries are on the pipeline.

And in terms of interaction and fostering better understanding regionally, it’s pragmatically viewed, by Asean countries, as a win-win situation. But, more importantly, in striking a careful balance between China’s territorial grabs and longer-term regional peaceful dialogue, will be the eye-catching strategy in the coming months.