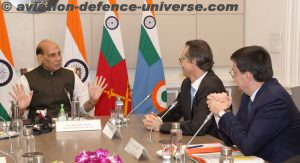 New Delhi. 07 July 2022. A high-level delegation of French company Safran Group led by its CEO Olivier Andries called on Defence Minister Rajnath Singh in New Delhi on July 05, 2022. Safran is one of the leading original equipment manufacturers of advanced aircraft engines for civil and fighter jets.

During the meeting, the CEO of Safran briefed the Defence Minister of their company’s plans to set up a Maintenance, Repair and Overhaul (MRO) facility in India for overhaul of LEAP-1A & LEAP-1B engines in use by Indian and foreign commercial airlines. The MRO facility through direct foreign investment of $US 150 million in Hyderabad is expected to create 500-600 highly skilled jobs. The facility will be able to overhaul over 250 engines per year in the beginning.

The CEO also briefed Rajnath Singh of their plan to inaugurate this week Safran Aircraft Engines and Safran Electrical & Power India Pvt Ltd. – both to come up in Hyderabad and Safran-HAL Aircraft Engines as a joint venture in Bengaluru. Safran aircraft engine, Hyderabad, with an investment of Euro 36 million and located on 10 acres land in the Hyderabad SEZ, will produce parts and components for advanced aircraft engines including rotating seals.

Safran Electrical & Power India Pt Ltd will produce harness for civil and fighter jets. The joint venture between Safran and HAL is for production of rigid piping for aircraft engines including helicopter engines. The joint venture is expected to hire 160 new highly skilled personnel.

The CEO of Safran outlined his company’s long-term plan in co-development and co-production of advanced jet engines and transfer of technology as per existing policy of Government of India. He briefed Rajnath Singh on capabilities of Safran in areas of technology beyond aircraft engine.

The Defence Minister noted the great importance India attaches to the strategic partnership with France. He welcomed new facilities in Hyderabad and the joint venture in Bengaluru. He invited Safran for more co-development and co-production projects in India, in tune with ‘Make in India, Make for the World’ and ‘Aatmanirbhar Bharat’ of the Government of India. “We are a big market. However, we are increasingly focused on making in India for addressing the needs in a competitive manner and supplying to friendly foreign countries. You can leverage all the competitive advantages India offers, including the cost advantages and availability of trained manpower,” he said. The Defence Minister asserted that both countries can contribute to each other’s capability building.