New Delhi. 25 June 2016. Another feather in the Make in India cap. Brahmos, the supersonic cruise missile system, has been successfully integrated and test-flown with the Indian Air Force’s (IAF) Su-30MKI frontline strike fighter. The aircraft was in the air for 45 minutes and was flown by Wg. Cdr. Prashant Nair and Wg Cdr M S Raju, both flight test crew of ASTE.

This flight gets the BrahMos air version programme closer towards actual test firing when a 2,500 kg BrahMos air-to-ground missile will be fired from Sukhoi-, which is expected to happen by the end of this year . The missile, said to be the heaviest such, had its milestone flight for 45 minutes at the HAL Airport at Nashik, said a statement from Hindustan Aeronautics Ltd, which manufactures the Su-30s. It was not a real warhead but was of the same weight, shape and size.

The first carriage flight of Su-30 MKI aircraft with BrahMos missile was successfully achieved at HAL Airport, Nashik today. “It is a perfect example of Make in India and an engineering marvel in aviation history of India. It proves that when all agencies come together with one mission, there is nothing like impossible”, said T. Suvarna Raju, CMD, HAL who was present on the occasion. 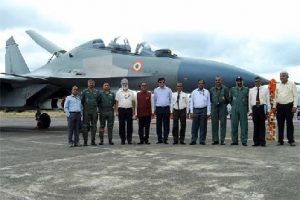 He pointed out that this unique program was taken up by HAL as an indigenous challenge at its Nashik Division and the required data was generated without the assistance of OEM for the modification. It is not the techno-economics of the project, but HAL’s commitment to self-reliance which made HAL to sign the contract with BAPL in 2014 for modification of two Su30 MKI aircraft for integration of BrahMos missile. The first modified aircraft was airborne in one year and the second aircraft in the second year. This is the second project where HAL presumed the role of OEM and modified the airframe of license build aircraft.

Sudhir Kumar Mishra, CEO & MD, BraMos Aerospace Pvt Ltd (BAPL) said it is the first time in the world that such a heavy weight (2500 kg) supersonic cruise missile has been integrated on fighter aircraft. “The world did not believe us that we could do it and thanks to the vision of late President A. P. J. Abdul Kalam, we could achieve this today and history is made”, he added. 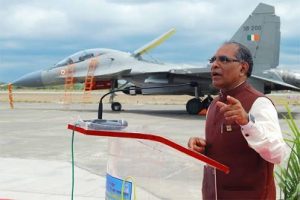 The missile is developed by BAPL. Other agencies involved in the project include CEMILAC and DGAQA.
During the course of integration of BrahMos on Su-30 MKI, HAL Nashik gained rich and valuable holistic knowhow to achieve self-reliance in integration and testing of BrhMos class of weapons on Su-30 MKI aircraft. With this HAL-Nashik aims to be a center of excellence for integration of weapons systems.