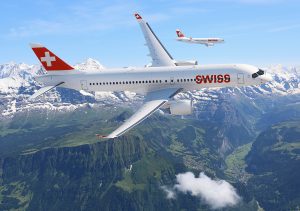 – SWISS becomes the first airline to integrate both C Series aircraft models to its fleet
– CS300 aircraft to be operated from Geneva, Switzerland

MONTRÉAL, QUÉBEC. 26 May 2017. Bombardier Commercial Aircraft handed over its first CS300 aircraft to Swiss International Air Lines (SWISS) at Mirabel, Canada, where the C Series aircraft are manufactured. SWISS is going to be the first airline to operate both C Series aircraft models. SWISS will dedicate this new aircraft to the French-speaking part of Western Switzerland as the airline will operate this CS300 aircraft from Geneva.

“We are very proud to deliver SWISS’s first CS300 aircraft today. SWISS is known for its leading-edge technical and operational excellence and has been a wonderful partner for the C Series aircraft program. The SWISS family has been part of the C Series journey from the beginning and we thank the airline for its continuous support,” said Fred Cromer, President of Bombardier Commercial Aircraft. “This new delivery is a demonstration of Bombardier’s commitment to deliver revolutionary and high-performing aircraft and help connecting communities with the best flying experience in the world!”

SWISS’ first CS300 aircraft is scheduled to enter service on June 1st, 2017 with its maiden commercial flight taking passengers from Geneva to Heathrow. SWISS will take delivery of a total of 30 CS100 and CS300 aircraft.

“The C Series aircraft program continues getting strong momentum with its successful entry into service with SWISS and today, the launch airline becomes the first one to take delivery of both the CS100 and the CS300 models,” said Rob Dewar, Vice President, C Series Aircraft Program, Bombardier Commercial Aircraft. “The C Series airliners demonstrate robust in-service performance to date and we are confident that SWISS will also benefit from a smooth entry-into-service with the CS300 aircraft.”

“We are delighted that, having successfully integrated the first Bombardier CS100s into our fleet from mid-2016 onwards, we can now welcome our first CS300,” says Thomas Klühr, SWISS’s Chief Executive Officer. “With its 20 additional seats, this second model in the C Series family ideally complements our current aircraft fleet, and gives us an optimal equipment mix for our European short- and medium-haul services. Our first CS300 will be initially stationed in Geneva, where its superior comfort credentials will be excellently suited to this premium travel market,” Klühr continues. “In fact, our entire Geneva-based fleet will soon consist solely of Bombardier C Series aircraft.”

The C Series aircraft is manufactured by the C Series Aircraft Limited Partnership, an affiliate of the Bombardier Commercial Aircraft segment

Published in Airlines and OEMs