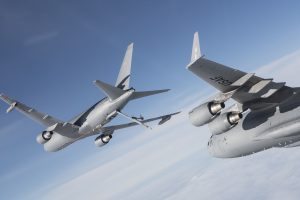 This order is the third low-rate initial production lot for Boeing. The first two came in August 2016 and included seven and 12 planes, respectively, as well as spare parts.

Boeing plans to build 179 of the 767-based refuelling aircraft for the Air Force to replace its legacy tanker fleet. Tanker deliveries will begin later this year.

“This award is great news for the joint Boeing-Air Force team and reinforces the need for this highly efficient and capable tanker aircraft,” said Mike Gibbons, Boeing KC-46A tanker vice president and program manager. “Our Boeing industry team is hard at work building and testing KC-46 aircraft, and we look forward to first delivery.”
“Placing an order for another 15 aircraft is another important milestone for the KC-46 program,” said Col. John Newberry, Air Force KC-46 System program manager. “I know the war fighter is excited about bringing this next generation capability into the inventory.”

Boeing received an initial contract in 2011 to design and develop the Air Force’s next-generation tanker aircraft. As part of that contract, Boeing built four test aircraft – two configured as 767-2Cs and two as KC-46A tankers. Those test aircraft, along with the first production plane, have completed nearly 1,500 flight hours to date.The KC-46A is a multirole tanker that can refuel all allied and coalition military aircraft compatible with international aerial refueling procedures and can carry passengers, cargo and patients.
Boeing is assembling KC-46 aircraft at its Everett, Washindton, facility.