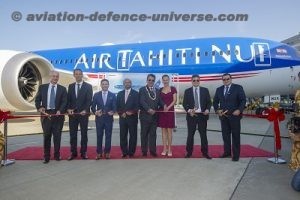 North Charleston, S.C., 09 October 2018. Boeing , Air Lease Corp. and Air Tahiti Nui celebrated the delivery of the airline’s first 787-9, via lease from ALC. This is the first Boeing airplane to join the Tahitian airline, which plans to use the longest-range Dreamliner to replace aging A340s and connect its home base in the South Pacific with world capitals such as Paris, Tokyo and Los Angeles.

Air Tahiti Nui joins other carriers in the Pacific who operate long-distance routes in switching to the super-efficient and long-range 787-9. The airplane can fly up to 7,635 nautical miles (14,140 km), while reducing fuel use and emissions by 20 to 25 percent compared to older airplanes.

“Our dream has finally become reality with the arrival of Air Tahiti Nui’s first 787-9 Dreamliner,” said Michel Monvoisin, Chief Executive Officer and Chairman of Air Tahiti Nui. “The Tahitian Dreamliner will make flying to one of the world’s treasures an unforgettable experience, as we introduce new seats and a culturally inspired cabin on the 787. As we celebrate our 20th anniversary this year, the 787 Dreamliner will guide us towards another successful 20 years and beyond.”

The airline announced in 2015 it would lease two 787s through ALC and purchase two 787s directly from Boeing as part of its plan to upgrade its fleet for the future. French Polynesia President Edouard Fritch and other government dignitaries joined the airline in celebrating the milestone delivery at Boeing’s South Carolina Delivery Center.

“We are pleased to deliver ALC’s first aircraft to Air Tahiti Nui,” said Marc Baer, Executive Vice President of Air Lease Corporation. “The capabilities of the 787 will help enhance Air Tahiti Nui’s commercial operations and will significantly increase the efficiency of its future fleet.”

“We are honored to welcome Air Tahiti Nui as a new Boeing customer and the latest member of the 787 Dreamliner family. We are confident the airplane’s market-leading efficiency and unmatched passenger comforts will transform the airline’s operation,” said Ihssane Mounir, senior vice president of Commercial Sales and Marketing for The Boeing Company. “This delivery opens a new partnership between Boeing and Air Tahiti Nui, and demonstrates the strength of our partnership with ALC.”