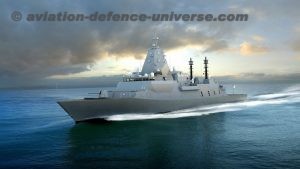 Farnborough. 2 JULY 2018. The Global Combat Ship – Australia is based on BAE Systems’ Type 26 frigate, one of the world’s most advanced anti-submarine warships, which the Company is currently constructing in Glasgow for the Royal Navy. Once contracted, the new ships, to be called the Hunter class, will be built in South Australia by an Australian workforce, using Australian suppliers from every state and territory.

The project is expected to create and sustain at least 5,000 highly skilled jobs, providing a significant contribution to the development of Australia’s continuous naval shipbuilding capability and a boost to the nation’s manufacturing industry.

BAE Systems Chief Executive, Charles Woodburn, said: “BAE Systems’ selection as preferred tenderer for SEA 5000 reinforces our position as a leading designer and builder of complex maritime platforms. I am proud that our world class anti-submarine warfare design and our approach to transferring technology and skills to the nations in which we work is expected to contribute to the development of an enduring world-class naval shipbuilding industry in Australia.”

BAE Systems Australia Chief Executive, Gabby Costigan, said: “Construction of the Global Combat Ship – Australia is expected to make a significant contribution to the nation’s economy, creating thousands of jobs, supporting new industries and boosting the national supply chain for decades to come. We are committed to creating a strong, sustainable and innovative naval shipbuilding industry that will see highly skilled Australians building and sustaining warships for the Royal Australian Navy.

“We are proud to have been selected as preferred tenderer to provide the Royal Australian Navy with a world-class ship, equipped with the latest technologies and designed specifically to meet its needs. The Global Combat Ship – Australia will help protect our shipping lanes and regional trade routes, serve humanitarian missions and provide the nation with a formidable naval capability.”

The company will soon commence negotiations with Australia’s Department of Defence on the initial design part of the contract, which is expected to be in place by the year end, with production expected to commence in 2020.