Akasa Air operates its maiden flight from Pune, the ninth destination on its network 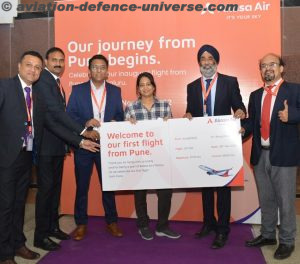 New Delhi. 26 November 2022. Akasa Air, India’s newest airline, today inaugurated its first flight on the Pune-Bengaluru route. Pune is the ninth destination in Akasa Air’s network and its second city in the state of Maharashtra after Mumbai. The airline is offering double daily flights on the Bengaluru–Pune route starting today with additional daily flights linking the two IT hubs, starting from December 10, 2022.

Earlier in November, Akasa Air announced the addition of Visakhapatnam as the tenth destination on its network, with flights connecting the city with Bengaluru, scheduled to commence from December 10, 2022, and a second frequency on the route to be added on December 12, 2022. Since its launch in August this year, Akasa Air has been progressively scaling up its operations and by mid-December expects to cross over 450 weekly flights on a total of fourteen routes across ten cities – Ahmedabad, Bengaluru, Kochi, Chennai, Mumbai, Delhi, Guwahati, Agartala, Pune, and Visakhapatnam.

This rapid expansion of cities, routes, and frequencies is in line with the airline’s vision of adopting a phased yet rapid approach to grow its network across India.

Commenting on the maiden flight and the new route, Praveen Iyer, Co-Founder, and Chief Commercial Officer, Akasa Air, said, “Commencement of operations on this route is a momentous occasion as we expand our footprint in Maharashtra by adding Pune to our network. Both Pune and Bengaluru are important IT hubs, and enhanced connectivity on this route, backed by affordable fares, are in line with our purpose to strengthen important transportation links of our country, which will provide a boost to economic development. We will soon launch another daily flight on this route from December 10 onwards, taking daily departures from Pune to three convenient options through the day.”

Akasa Air started its commercial operations with two aircraft and has subsequently received nine aircraft to date. It will continue to grow its network to establish a strong pan-India presence focusing on the metro to tier 2 & 3 route connectivity, using a fleet expansion plan that adds one new aircraft every 15 days. Akasa Air’s fleet size will be 18 aircraft by the end of March 2023, and over the next four years, the airline will add 54 additional aircraft, taking its total fleet size to 72 aircraft.

Bookings for flights on Akasa Air are available on its website – www.akasaair.com, android & IOS app as well as through travel agents and several OTAs across the country.