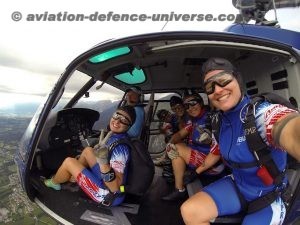 Toulouse. 08 September 2018. A world-class parachuting squad requires many of the same qualities that have driven Airbus’ success around the globe: precision, focus and a great team spirit.

This is according to Pascale Dumarcet, who is perfectly-positioned to compare the two activities: she’s a design office engineer working at Airbus in Toulouse, France; as well as a member of the company-sponsored Ang’elles all-women parachuting team that is earning accolades at style and accuracy competitions around the world.

Airbus has sponsored the all-women Ang’elles parachute team, which competes under the aegis of the French Skydiving Federation, since 2016.
“The sport has a small margin of error,” said Dumarcet, whose recent activity includes contributions to 3D digitalisation of company’s A330 widebody airliner for use in everything from design, production to in-service maintenance and support. “In our skydiving competitions, to cleanly land at the designated position we must simultaneously manage varying wind velocities, thermals and more while free falling from an altitude of some 2,200 meters.” 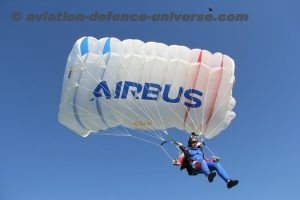 At such international competitions, the Ang’elles can compete as a five-person team (with members selected by the French Skydiving Federation). During the FAI event in Bulgaria, they also won a pair of bronze medals for “Team Accuracy” and “Overall Female Team.”