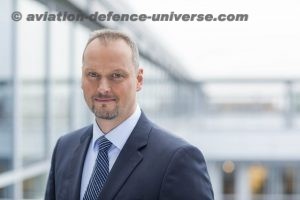 “Michael brings a vast amount of expertise in digitalisation, end-to-end process optimisation, manufacturing, quality and supply chain management – key assets to transition our company to the next levels of production efficiency,” said Guillaume Faury, President Airbus Commercial Aircraft. “Michael’s leadership will be crucial for the future success of Airbus. I am thrilled to welcome him to the team and thank the Board of Directors for their support in this selection process.”

Michael Schöllhorn will report to Guillaume Faury who will succeed Tom Enders as Airbus CEO following the shareholders Annual General Meeting on 10 April 2019. He will also become a Member of the Airbus Executive Committee.

On the appointment, Airbus CEO Tom Enders said: “We are glad to welcome Michael, and we bid farewell to Tom Williams, a great personality and leader both in Airbus and the wider European aerospace industry for many years. Tom braved countless challenges during his time with Airbus, always overcoming them in the best interest of the company and its customers, and never losing his dry Scottish humour. Tom’s impressive career took him from the shop floor as an apprentice with Rolls-Royce in 1969 to the Airbus Executive Committee. I am forever grateful for his engagement, leadership and friendship. I wish him a well-deserved retirement.”

Michael Schöllhorn’s wealth of diverse manufacturing and production expertise was gained from 1999 at the Bosch Group. Most notably, between 2012 to 2014 he was Executive Vice President Manufacturing and Quality, additionally heading the Global Business unit for chassis and safety sensors. Prior to this, he held several international management positions in the US and Czech Republic. From 2004 to 2008 he was Vice President of Quality Management and from 2012 to 2014, Executive Vice President Manufacturing and Quality. In 2015, Michael was appointed COO and Member of the Management Board for BSH Home Appliances GmbH (100 percent subsidiary of the Robert Bosch GmbH), one of the world’s leading home appliance manufacturers.

Michael Schöllhorn holds a degree in Mechanical Engineering and a PhD in Control Engineering from the Helmut Schmidt University in Hamburg. He served in the German Armed Forces as a helicopter pilot and officer from 1984 to 1994.

25th February in history
View All
Did You Know This?

25th February in history
View All
Battle Ground COVID 19
Did You Know This?