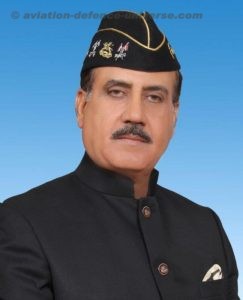 New Delhi. 21 May 2020.  Indian MRO Air Works  announced the appointment of Lt. Gen. A K Singh (Retd.) as an Independent Director of the Company. The appointment will be subject to the receipt of all requisite government and regulatory approvals, including security clearance.

Lt Gen A K Singh (Retd) the erstwhile Lt Governor of the Andaman & Nicobar Islands and Puducherry, Ex GOC in C Southern Command is one of the few officers to have trained with both the NATO & Warsaw Pact at the height of Cold War. Known for his high integrity and professionalism, the General is looked upon as a role model by large numbers in the Armed Forces.

The General has teneted key Operational appointments, headed the foreign division of the army & was also the Director General Perspective Planning, where he drew up the long-term perspective of the Indian Army. After a distinguished service in the Armed Forces, Lt Gen A K Singh (Retd.) was entrusted with the responsibility of Administrator/Lt. Governor of Andaman & Nicobar Islands in July 2013 and later concurrently assumed the charge of Lt. Governor of Puducherry in Jul 2014, where he made a great difference with his unique qualities of head & heart. The General is remembered in both the UTs for his high integrity, professional approach and many citizens refer to his tenure as the Golden period. He has also been a member of Prime Minister’s Team India, as well as a member of the National Development Council and Inter State Council. His book “Military Strategy for India in the 21st Century” has been published in 2019.

The induction of a seasoned defense veteran and an experienced administrator such as Lt. Gen. Singh (Retd.) will strengthen the Air Works Board which currently comprises four members including, its MD & CEO, D Anand Bhaskar and Executive Director, Ravi Menon.

Commenting on his appointment, Lt. Gen. A K Singh (Retd.) said, “I am excited to join Air Works – an ‘institution’ that has served the nation and the aviation sector since the past 70 years. This marks my first step into the pulsating world of aviation and I look forward to work closely with members of the Board as well as the leadership to deepen key relationships and enhance the growth, performance and position of the organization.”

He further added, “Despite forming the backbone of Indian aviation, MRO services & aviation engineering/maintenance have always been away from the limelight. However, given the strength of India’s domestic aviation market, the current global circumstances have brought forth the urgent need for the country to be self-reliant or Atma Nirbhar, as pointed out by our Hon’ble PM. It is good to see the Government taking strategic measures that will not only give the MRO sector its long pending recognition and stature, but will also lend it a position of strength to fulfil the Govt’s ambition of making India an MRO hub while simultaneously providing extensive employment opportunities to youngsters.”

Welcoming the appointment,  D Anand Bhaskar, MD & CEO said, “I am delighted to welcome Lt. Gen Singh (Retd.) to the Air Works family. Not only will his military and public office experience strengthen our corporate governance but his presence will also help us in achieving a stronger alignment between our various service offerings for our customers, including the defense services. Given his enviable track record, I am sure that his sharp insights will be of immense value in ensuring the fulfilment of our strategy, including our key
objective of making Air Works the largest and most preferred MRO in the entire South Asian region.”

Last month, on 16th April, Air Works achieved a significant milestone in Indian aviation by completing 70 Years of operations. The Company, which was founded by members of the Menon family at Mumbai Airport (T2) has grown to become India’s biggest, independent MRO with a pan-India network of 27 locations and 1300+ employees, serving both civil and military customers that include global OEMs, commercial airlines, Business Aviation companies/ operators, leading global Lessors, as well as the Indian defense services. From being India’s first and only global MRO, Air Works has today transformed by recalibrating its strategy and sharpening its focus on India and South Asian market, which are poised for substantial growth in this decade.

Aside from demonstrating strong financial and operating performance, Air Works has also diversified its bouquet of offerings over the years. It today offers MRO services comprising Line maintenance, Base maintenance (Mumbai, Hosur and Kochi), Aircraft painting and interior refurbishing, Avionics upgrades and retrofits, Lessor Management Services, as well as Maintenance training, to a host of Indian and regional customers from its facilities that are DGCA and EASA-certified.