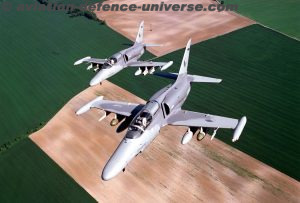 Prague. 19 January 2023 .  Aero Vodochody has completed the prescribed repairs (PP16) on all 16 single-seat L-159 ALCA aircraft and handed over the last one to the Czech Air Force. The L-159s have been extended for another eight years and other technical improvements have been made.

The L-159 ALCA light combat aircraft, registration number 6070, was the last of 16 single-seat aircraft that have been undergoing prescribed periodic overhauls at Aero Vodochody over the past two years. The last completed Alka was handed over to the 21st Tactical Air Force Base at Caslav of the Czech Air Force.

“To ensure the operational capability of the L-159 fleet and the defense of the Czech Republic, we delivered the repaired aircraft at regular intervals from September 2020 until the end of 2022, when we completed the repair of the last aircraft,” says Viktor Sotona, president & CEO Aero Vodochody: “The great advantage of L-159s is their cost-effective operation, especially compared to supersonic aircraft, in a large number of different variants of combat tasks,” he adds.

The second intermediate overhaul under the so-called PP16 (prescribed periodic work after 16 years of operation) includes inspection and testing of all parts of the aircraft, including instruments. The contract between the Ministry of Defence of the Czech Republic and Aero Vodochody, concluded in 2019, also included technical improvements to some parts and functions of the aircraft. The L-159s were modified to use night vision goggles (NVGs), including the adaptation of the cabin and the installation of the aircraft’s interior and exterior lighting kits. A new electronic backup display (ESIS) can replace other backup instruments and provide pilots with critical position, speed, or descent data in the event of a failure of conventional devices.

Aero Vodochody completed the production of the last 16 L-159 aircraft in December last year and handed it over to the Czech Air Force in the form of a ground handover. The actual aerial handover of the last L-159 aircraft was conducted in January 2023.

The L-159 aircraft are used by the Air Force of the Army of the Czech Republic. In addition, the Czech light attack aircraft from Aero Vodochody is also in the fleet of the Iraqi Air Force. For training purposes, Draken Europe has also recently started using them, where they play the role of aggressors in the training of pilots of RAF fighter aircraft – Eurofighter Typhoon and state-of-the-art F-35 aircraft.